EA has tried to make more casual sports games like NFL Street and FIFA Street many times before. But they were never really popular, probably due to the fact that they didn't feel like full priced games and didn't compare well with their regular line up in terms of value. The regular sports games had so much more content, and the hip hop presentation of the Street games probably turned some casual off as well. All of this led to demise of the Street line, and it wasn't until this year they decided to try again.

But this time, they didn't go for retail, but downloadable games for Playstation 3 and Xbox 360. 3 on 3 NHL Arcade was the first casual sports game and was a big success. A fast, fun and easy to play hockey game that seemed to appeal to everybody with focus on multiplayer and nothing else. And now, six months later, it's time for Madden NFL Arcade which has a similar concept.

American football made easy for everyone. I'm a big fan of football myself and really enjoys the regular Madden games, but I realise that for many people in Europe, the rules are hard to follow. Luckily for all those gamers, Madden NFL Arcade is really easy to enjoy for all, from the most hardcore Madden fan to people who never tried to play video game football once or even watched a game on TV.

The set up is simple. Five players on each team, a 60 yard field, no penalties, no special teams and a whole lot of touchdowns. The playcalling is as simple as can be. Three types of pass plays and one for the running back. The defence can choose between three types of pass blocking and a blitz. That's it. Play ball.

The controls are really good and with a lot of tactics removed from American football, it really feels more "arcadey" with a lot of spectacular passes and death defying runs. There is quite a lot of depth in Madden NFL Arcade, well hidden beneath the comic look of the players and super moves and with some practice, each down will look like something from the highlight reel from the real NFL.

The big catch with Madden NFL Arcade is that you really need to play it against human opponents. The computer feels cheap and there aren't any leagues to climb in and no Super Bowl to play. Just playing game after game with no real reward, isn't much fun. This was the case with 3 on 3 NHL Arcade as well, and if there is something I hope that EA will work on in the sequel (there will be one, right?), that's it. More meat for the single player mode.

Madden NFL Arcade can easily be recommended for everybody from the all star quarterback to the complete n00b. It's really easy and nice and have all the necessary licenses like five top stars from all 32 NFL teams. These sports arcade games is a much better idea than the Street series and I really hope we'll get more of them in the near future.

Advertisements
Gamereactor UK
+
Great graphics, complete NFL license, easy to learn, a good game even for non-football fans.
-
Misses league/super bowl, annoying sound, only fun against human opponents
is our network score. What's yours? The network score is the average of every country's score

A casual football game for PSN and XBLA. Jonas Mäki takes the pigskin and runs 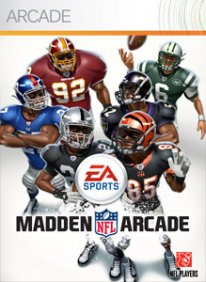