At their annual Captivate event, Capcom announced Lost Planet 3. A game that takes a step back and tries to go back to the original vision for Lost Planet. Set on E.D.N. III, the game focuses on your fight against hostile environments as you explore the ice covered planet.

The game follows the story of Jim, an American gentleman with a full beard, who takes a job on E.D.N. III to provide a better future for his wife and children on Earth. There are rumours on base that they are not the first humans on the planet, and it doesn't take long until Jim starts to doubt the official company line. He finds some old remnants of research station, and he realises that not only are they not the first ones to visits the planet, but neither are they alone. Left with few options Jim has to find out the truth.

Lost Planet 3 mainly deals with Jim's personal story and the world he explores. You get to share his frustrations, his hopes and dreams for the future. Therefore, the game also moves away from some of the design found in the previous instalments. You still play the game from the third person "over the shoulder" perspective, but the camera is place much closer to the character. It's obvious that the developers have been inspired by a game like Dead Space, especially as Jim's in-game menu bears an eerie resemblance to that of Isaac Clarke. You will also find sound and video files that will provide you with background to each of the areas you visit. A fresh element are the video messages you send to and receive from your wife that you see while the game loads a new level. A nice way to pass the time while you wait for the game to load.

Exploration is key to the experience. The base you were sent to work at functions like a hub where you find missions and upgrade your equipment. You pick a mission and jump on board you Utility Rig, a massive robot equipped with a grapple and a giant drill and you make use of these to overcome obstacles along the way. As you climb on board the rig your perspective switches over to a first person view inside the cockpit. This in order to give the player more of a sense of being in control of the giant mech. Unfortunately the grapple and the drill are the only tools your robot is equipped with and you won't be able to use any weapons while manning the machine. The idea is that this mech is a predecessor to the combat mechs found in the previous entries in the series.

While there are no weapons attached to your mech there is always room to improvise. As you make make your way onto the fields of ice there are more dangerous things than frostbite to be concerned with. E.D.N. III is full of violent creatures who are looking to attack anything and everything. You can make use of your massive metal claw to grab a hold of the monsters and give them a squeeze. As your claw is quite powerful they may just pop and send slimy goo flying all over the place. If you're more of a handy man you may want to use the drill instead, the end result is the same - a gooey mess. Let's just hope there is a place to wash your mech back on the base.

Massive ice storms on E.D.N. III make it impossible to use your mech at all times, and every now and then an ice storm can cover the whole Utility Rig with a crippling layer of ice. The only way to deal with this is to jump out and try and shoot the ice off. When this happen a lot of opportunistic monsters come out of hiding to attack Jim. Equipped with a rifle Jim preferably takes aim at the glowing sections of the creatures to do maximum damage (much like the previous titles), and if the monster get too close Jim can pull out his knife to fend them off. This triggers something of a quick time event where Jim needs to try and hit the green areas (typically in the creature's mouth). One hit is often not enough, so you're given plenty of time to witness man fight monster up close and personal. Once a monster is disposed off he drops thermal energy that can be used to upgrade your weapons and your Utility Rig back at the base.

E.D.N. III is a dangerous place even if you're inside of a giant robot. You're far from the biggest resident in these parts, and if you run into some of the massive crab like creatures that inhabit the planet you have to make use of tactics and skill. The crabs come in two sizes. The smaller ones can be taken care of both on foot and with the Utility Rig, while their larger better protected brothers have to be held down with the rig while you climb out and shoot them in their weak spot - the stomach. Unfortunately your rig isn't designed for combat and as you take damage the rig will stop working for a while. When this happens you have to outsmart the crab and avoid its attacks, while you wait for the rig to be up and running again.

Apart from the expansive ice wastes and the Utility Rig you will also be sent to explore areas where the mech cannot go. This is where the inspiration from the survival horror genre becomes evident, and you will begin to lose information on your weapon status and health the further away from your robot you go. This way you will have to try and remember how many rounds you've spent as you make your way through claustrophobic ice corridors.

In many ways Lost Planet 3 comes across as both a continuation and a reboot of the series. Exploration and survival horror has been lead words for the development, and perhaps it is a necessity if Capcom wants Lost Planet to remain relevant. The game has yet to be given a firm release date, but it is being targeted for release early next year on PC, Playstation 3 and Xbox 360. 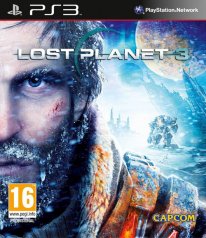