To me Lost Planet was all about and ice and snow, and a well written story about Wayne his comrades as they fought snowpirates. With Lost Planet 2, however, Capcom have thrown all of that out and replaced it with tropical jungles and all-new protagonists. A brand new beginning and there is not a lot on the colony planet EDN III, that is familiar at first glance. In Lost Planet 2 the story will switch between multiple, often anonymous, main characters which in my opinion makes it less engaging.

Unlike its predecessor, Lost Planet 2 is built with multiplayer in mind. Whether you play alone or with others, you are part of a squad of four soldiers, but as is often the case when playing with A.I. controlled characters, there are situations where everything boils down to shepherding mindless sheep. Lost Planet 2 was simply not designed with solo players in mind, much like Capcom's Resident Evil 5. A task such as going out to defend the four generators, where everyone is assumed to take care of one each. If you play solo, the three companions will follow you around and make for a frustrating experience where three generators are unguarded at all times.

It is when four people controlled the characters that Lost Planet 2 comes to its own. It feels like a mix of mission-based multiplayer war and death matches, where you can die, only to spawn again after a few seconds and throw yourself into the thick of the battle instantaneously. It is filled to the brim with action, and your guns won't have many seconds to cool down in between enemy encounters. Akrid, the huge giant insects are back in full force. The tropical climate has enabled them to grow larger and unfortunately they also seem even more pissed off than before.

There are now several factions fighting each other on EDN III and you will meet both Nevec, snow pirates and several other . There is much more conflict between people than in the first game, which adds a nice variation to the combat. The grappling hook that was so important in the first game has been toned down. It is still used to get up on higher ledges, but the bulk of the action unfolds on the ground.

Lost Planet 2 has simply put on some weight. The enemies are both worse and better, Vital Suits are fun to use, the explosions are insane, the audio has a mean quality to it, and the graphics are greatly improved. It makes me think of Gears of War, and the Jun Takeuchi has often said that Epic's steroid pumped action romp is one of his favourite games. There are worse games to take inspiration from. And not only is the game inspired by Gears of War, Capcom has struck deal with Epic, making both Gears of War's Dom and Marcus will be playable in the Xbox 360 version of Lost Planet 2.

Not all fans of the original will appreciate how Capcom have chosen to proceed with the series. Lost Planet 2 is a pure multiplayer game that requires a connection to be truly enjoyable, but if you're into co-op gameplay Lost Planet 2 is very promising and with a few extra months of fine-tuning, this could be a memorable trip to the burgeoning jungles of a planet we love to loose ourselves on.

Lost Planet 2 is all about co-operative fun and tons of action. But has the game lost some of the appeal of the original? Read the review...

Face off against all the bosses

We take a look at Capcom's latest title

The review will be online today

Screens from Helix and Back to the Island

Check out the latest multiplayer shots 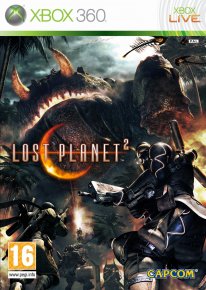