As I watch the introduction sequence of Lost Horizon, a travel montage ripped straight out of an Indiana Jones film, I found myself humming John Williams' famous theme tune. And the theme is almost the only thing missing, as the game could have been based on a forgotten script hidden away somewhere in George Lucas' desk.

It's only fitting that Lost Horizon is an adventure game. And everything from the main character, the good hearted scoundrel Fenton Paddock, to the story with the pursuit of a mystic civilisation and treasure hidden away in an unexplored part of Tibet, is an unashamed celebration of the man with the hat and the whip. As the game takes place in 1936 there are naturally Nazis who are out to get the same treasure.

Lost Horizon is drenched with a similar enthusiasm as the adventure novels from the 1950's. You know the ones that had phrases like "Fantastic Adventure!", "Excitement!" and "Enigmatic mysteries!" printed on the cover.

What impressed me the most with Lost Horizon, was the high pace it kept. The adventure genre is usually a fairly slow and methodical experience where you take your time to explore, and solve puzzles. Then your brain cells kick in, and you connect the dots and progress in the game, until the next obstacle appears and your stuck for a while again.

Lost Horizon avoids some of the trappings of the genre and this results in a higher pace. Add to that the Indiana Jones formula, where you travel fast and the low difficulty of the puzzles, and you have a very fast game. The puzzles in the game are often simple, and small icons will quickly let you know how to combine things with eachother.

Another problem, one of the bigger ones, is the simplicity of the story. Our main character, Fenton Paddock, has his moments, but he lacks the charm and humour, that makes Harrison Ford's Indiana Jones such a likeable hero. When the rest of the characters are even thinner, and less exciting, we are just left with the treasure hunt and the adventure.

Fenton Paddock travels the world in his race against the Nazis, and he visits places like the jungles of India, a Berlin under Nazi rule during the Olympics, all of them inviting and begging to be explored. However, the game fails to produce any real excitement or drama during Paddock's travels. The great secret that lies hidden in Tibet, is revealed in a journal found by accident, and assaults the player with abstract mentions and vague hints.

After a while you feel a bit like a lost tourist. A tourist who is dragged around from one digital holiday resort to another, without any sense of immersion. The same can be said of the puzzles, that are often so poorly designed that you will have no idea why you just put icicles in a homemade pressure cooker.

As you sit there and click away, you try to find a red thread in the logic employed by the developers. The lack of challenge means that you will progress quickly, so frustration is never a problem, there just a constant sense of indifference. Your actions lose their meaning and there is a lack of context as you struggle to understand what the games wants from you. A bad spot for you as a player to find yourself in.

Despite it's inspirations, Lost Horizon is one of the least dangerous games I've played in a long time. That's not saying it's horrible. I enjoy the familiar formula of an adventure game, and the moments when you are about to solve the more complex puzzles, are some of the best moments of the game.

There is a great divide between Lost Horizon and the movies that inspired it. Much like the case was with the most recent Indiana Jones film, it seems as though they have crossed ingredients off on a checklist without caring much for consistency and meaning.

Animation Arts have attempted to streamline their game, with a lower than usual difficulty level and faster pace. In their ambition to achieve this they have forgotten what really makes an adventure fun. Something that could also be said of the last Indiana Jones film, so in a sense Lost Horizon lived up to what we got from an Indiana Jones adventure. But we would have loved more Temple of Doom, and less Crystal Skulls.

Gamereactor UK
+
Nice pacing, inviting locations, good for beginners.
-
Not challenging enough, random puzzle solutions, the story fails to grab our attention.
is our network score. What's yours? The network score is the average of every country's score

An adventure game inspired by Indiana Jones. How could things go wrong? Lasse tells us exactly what went wrong with Lost Horizon. 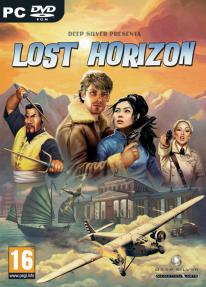