Diablo III's anniversary patch has just been released, allowing players to experience some vintage Diablo action within the confines of Diablo III, introducing classic levels in a style reminiscent of the good old days in the series, complete with limited movement, a pixelated style, and retro sounds. This limited-time offering is a way to celebrate the series reaching its 20th birthday, and this anniversary event is just one more step on the long and windy Diablo road.

The first Diablo came out, you guessed it, 20 years ago, and received praise all round. It was an immersive dungeon crawler RPG you could really sink hours into, with an immense amount of content to get lost in. It was a fantasy RPG but with a twist, and experiencing different content each time was a huge plus. The fact that you could play all of this in multiplayer was just the icing on the cake.

What also helped Diablo was the unique, darker atmosphere it created. The name itself was even evocative of Satan and all things Hellish - this wasn't about unicorns and fairies but instead introduced you to a world full of demons and monsters, all of which filled the dark and gloomy corridors you were lost in. In short, it was the RPG to beat in 1996, and set the scene nicely for a sequel in 2000.

Diablo II carried this deep, ominous atmosphere with it, including a pervasive soundtrack and an atmosphere that really made you feel alone in this literally Hellish world you were plunged into. What also made this so moreish is the sense of progression, which had been taken further than its predecessor. Fans got hooked on collecting gold, loot, and equipment, not to mention the levelling up of your character, providing a never-ending quest for the best stuff you could find. Some may criticise the repetitive nature of Diablo II, but it became a classic just like the original, as did the expansion Lords of Destruction.

Then came a long wait. It wasn't until 2012 that Diablo fans got the third instalment in the series, a game that was equally well-received and mixed old with the new. There were nods to past games throughout, whether that be through the combat, level designs, or style, but there was also a lot new, including a new visual style that was a little more cartoony and added some brightness to a previously dismal series.

What also changed was the skill system, where a fearful and tense allocation of points gave way to a more forgiving system that rewarded experimentation and was less devastating when wrong. In terms of content, you couldn't ask for more, as there was plenty to play around with, loot, upgrade, interact with, and more. Diablo III was back and better than ever, but there was still more to come.

Like with the previous two games before it, Diablo III received an expansion pack not long after release, called Reaper of Souls, which saw the player take on Malthael, the 'Angel of Death', as he looks to use the Black Soulstone for evil. This was all then wrapped up in a nice little bow of the Ultimate Evil Edition, adding Reaper of Souls nicely onto the end of the base game's campaign.

Yet still Blizzard were not done with Diablo III. Ever since release, there have been a plethora of updates, including everything from tweaks, bug fixes, new events, and much more, the latest of which is 2.4.3 which, as you know, adds the anniversary event into the game, seeing the series come full circle with Diablo III's gameplay spliced into the original Diablo's levels.

Also with this update comes support for Sony's newest console PlayStation 4 Pro, and so if the continued updates weren't enough to convince you that Blizzard will support Diablo III into the future, this should be. Instead of an absence period, Blizzard will instead continue to support Diablo III with more content for fans to enjoy, from the small like Empowered Rifts, to the big, like the anniversary event.

It wasn't all smooth sailing for Diablo III however. There once was an auction house in the game, for instance, which was a pretty big issue for Blizzard and had to be removed when the Reaper of Souls update came out. There were a number of problems with it, one of which being that people used it to garner a lot of real money, and that it detracted from the experience of collecting loot, and many players rejoiced at its removal from the game. Like anything with real money involved, there were scammers ready to make use of it and exploit it, something that Blizzard hadn't anticipated.

Blizzard also had trouble anticipating issues even as far back as launch, and Diablo III infamously had a terrible launch, with constant connection issues arising from a far bigger player count than Blizzard had estimated. This wouldn't have been as bad if Diablo III wasn't an always-online game, but it was, and the first few weeks were plagued by frustrated fans, and persistent issues with connection.

Still though, Blizzard persevered, updated, and kept building on the game, adding and tweaking more and more. In terms of the future, then, there's one big thing on the horizon that Diablo fans should be excited for, and that's the Necromancer class, coming soon. This looks set to provide totally new gameplay options based on dark magic, something that fans of the original two games should most certainly appreciate, as well as new items, legendaries, and more. It's due some time in 2017, but considering how excited Blizzard were to reveal it back at BlizzCon, it doesn't seem as if the Diablo spark has died for them.

It also seems as if the Diablo spark hasn't died for fans either, as there are still many players in the dedicated fan base not only playing Diablo III but also the first two as well. Since 1996 Diablo has established itself as the dungeon crawler to beat, and 20 years on its still going strong. Diablo III is now four years old itself, yet it is still getting content and drawing players in on PC, PS4, and Xbox One, not to mention last-gen consoles. The era of Diablo is still here, and Blizzard's anniversary patch shows it hasn't forgotten its roots. 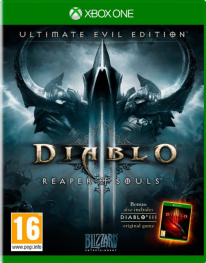