There's nothing more refreshing than taking a relaxing bike ride in the countryside. Being able to wind down and take in nature in all its glory is a gift, however, it can get a little boring after a while. Why not substitute that regular trip out on two wheels for Lonely Mountains: Downhill, an experience set in a picturesque wilderness that gives you the opportunity to ride down a thrilling mountainside like a cyclist jacked up on Red Bull.

Developed by Megagon Industries, Lonely Mountains: Downhill is a single-player racing title that tasks players with navigating down large mountainsides as fast, or with as few crashes as possible. Set across a broad range of locations, from dusty canyons to pleasant alpine forests, the whole point is to let you explore unspoiled nature, whilst simultaneously reaching the bottom of each trail in the fastest and most radical way possible.

As for how the title plays, fundamentally it's rather simple. If you are using a keyboard as your primary control input, then you only need to remember six keys; movement/brakes of the bike on the arrow keys, Shift for sprint and Enter to reset when you ultimately crash. You might think that because the control scheme is so straightforward that the gameplay is very similar, but if did you would be wrong.

Each of the four trails (on the six unique mountains) is designed to test your skills, which means that getting down them isn't easy. You will have to control your speed and manage your bike's handling to a tee if you want to make it to the bottom without countless crashes. However, this isn't the end of it, as things get even more difficult.

Lonely Mountains: Downhill is not played with a traditional camera, instead it uses a system that follows your rider down the mountain. Having this setup means that sometimes you will be playing effectively in third person although at other times you'll be looking directly at your rider, causing your controls to flip. When it does this, you'll have to remember that going left means turning right and vice-versa, which is incredibly difficult to master when you're consistently jumping between normal and flipped controls.

We briefly mentioned how the title has six different mountains available, each split into four separate trails. Every unique mountain brings a new location to play around with, such as the auburn forests of Redmoor Peak. The different trails, on the other hand, provide new paths for you to tackle down the side of each mountain.

As for unlocking these new mountains and trails, you will have to complete challenges within the previously unlocked levels. The challenges can range anywhere from beating the trail within a time limit, to reaching the bottom in a limited number of crashes - both will require your utmost concentration.

Each of the trails also offers a variety of increasingly difficult challenges (in fact there is 173 of them in total) that take much more skill but at least they reward you with special customisations, from bike parts to rider cosmetics. The outfits and paint jobs do not impact the gameplay at all, except for making you look infinitely cooler, however, the bike parts can be put together to unlock new bikes that offer different stats, for example, better handling or braking. Alike the number of mountains, there are six bikes to unlock as you progress through, although it is worth being aware that unlocking these will require a great deal of time and skill.

Since Lonely Mountains: Downhill is a single-player title, the level of online interaction is limited. With this being said, it does bring a leaderboard system to track and compare your best times on each respective trail against others around the world. This system also tracks the number of crashes you have in each level, which is quite a haunting stat if you are, like us, a speed junkie with little respect for safety.

One of the more impressive parts of the game is the art and sound design, which has been crafted to reflect the peace, beauty and tranquillity of isolated wilderness. The art direction is semi-realistic, but you can't help but be mesmerised by it in some cases. One of our favourite experiences was seeing the elegant waterfalls straddled against the mountainsides. As for the sound, it's very minimalist, featuring the occasional caw of a bird, the rustle of the wind through the trees, or just the scraping of your tires on the ground. The mountains are very relaxing in this aspect.

All in all, Lonely Mountains: Downhill is a tough bike racer that features a variety of challenges and relaxing, alluring levels. The physics engine that powers your bike is strong, however, the challenge of manipulating the bike when the controls are repeatedly flipping is difficult to manage and a little frustrating at times. With this being said, each of the gorgeous mountains will not hesitate to fascinate as you blast down them at a gnarly speed.

Gamereactor UK
+
The mechanics themselves are strong and the customisation brings some variety to the title, as well as this, the art and sound design is impressive.
-
The constant flipping of the controls becomes confusing and frustrating, taking a lot of the immersion from the game.
is our network score. What's yours? The network score is the average of every country's score

"Lonely Mountains: Downhill is a tough bike racer that features a variety of challenges and relaxing, alluring levels."

Take to the hills in style this holiday season, discovering presents as you ride in a Santa hat.

The mountain biking game is riding onto PC, PS4, and Xbox One, also letting Game Pass users on the saddle too.

"Crashing is part of the game" in Lonely Mountains: Downhill

We talked with Megagon Industries co-founder Jan Bubenik at GDC to hear about the eccentric mountain biking game that's all about danger and speed.

Originally announced for PC, the Kickstarter project has found a publisher in Thunderful. 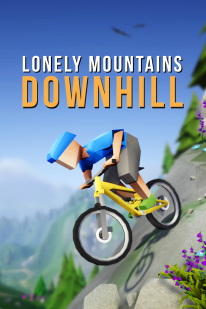