Rainy Frog, the company that helped Game Freak distribute Little Town Hero last year, has revealed via their website (thanks, Siliconera) that a PS4 version is coming to Japan on April 23, with a Western version presumably to follow.

The Nintendo Switch edition landed back in April as another title from the Pokémon developer, and you can check out our thoughts here before you get any of the versions.

This new release will include physical options for both the PS4 and the existing Nintendo Switch versions, and NIS America has already revealed physical Switch editions for the West.

Have you had the chance to play it yet?

"It's sad to see that Game Freak has stumbled when trying to branch out and deliver a new take on the JRPG genre."

Little Town Hero to get physical release for PS4

Little Town Hero coming to the PS4 in Japan this April

The RPG has just been released, and we're trying it out to see what Game Freak has up its sleeve.

You'll use ideas in battle, and villagers can also help you battle the various monsters in Game Freak's RPG.

Little Town Hero is coming from Game Freak on October 16

It all revolves around one village. 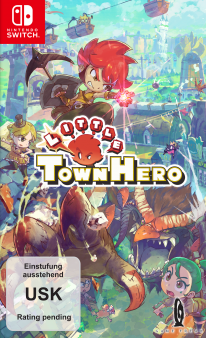