Tarsier Studios' Little Nightmares is the latest game to mix stealth and physics-based platforming, something that has been a trademark of Danish outfit Playdead (Inside, Limbo), and you could also compare Little Nightmares to Unravel, despite obvious thematic differences. That's not to say Little Nightmares plays exactly like games such as Inside, but there are obvious similarities and it's unavoidable to compare the two, even if they have little in common in terms of aesthetics, apart from how dark they both tend to be. What the comparison does mean, however, is that Little Nightmares is, unfortunately, being compared with one of the best games to come out of 2016.

Little Nightmares offers a dark and gritty underwater setting where you're constantly trying to escape the attention of those inhabiting or perhaps visiting the place. You're trying to make your way out of The Maw, as it's called, but there's no spoken or written narrative, and you're instead forced to interpret and make your own mind up about this weird setting that seems to serve as a restaurant for grotesque beings to gorge themselves on sausages and slabs of meat.

The original working title for the game was Hunger, and in many ways that's a better name for the game, even if it may spoil the theme somewhat. Hunger applies to both the guests at this bizarre, submerged world, and to the main character, called Six. At a particular point in each level, hunger overcomes Six, and this is something that's central to the progression of the narrative.

Where Little Nightmares truly shines is the audiovisual side of things. Tarsier has opted for a dollhouse perspective, which does wonders for the atmosphere and mood of the game, as does the way shadows are cast, how the camera moves, what you see, and what you don't see. There's also the sense that the whole place is rocking with the waves, something that also works very well with the dollhouse perspective. It all feels very deliberate.

There's a gritty quality to the game, and unlike the highly stylised and distilled Inside, there's a lot to interact with and explore apart from the items and objects tied to the critical path. That's not to say it's non-linear, as it's clearly not, but the added props make for a more tactile world and one that feels strangely real and grounded. The perspective also helps to strengthen the sense that Six is exposed and vulnerable. The many paintings and items in the various areas help flesh out the narrative somewhat too, but again it's all left up to your interpretation.

It's not just the visual design that elevates this game, however, and the audio also deserves a mention. There's a creepy nursery rhyme feel to the music (which is sparsely used), and the sound effects really do a great job on top of this as well. The various inhabitants of this place provide sounds that'll make your skin crawl, for example, and once again these sound effects help ground the experience, making those tense moments all the more gut-wrenching.

In terms of the gameplay mechanics in Little Nightmares, these are fairly simple and straightforward. As expected, you can jump, grab, pull, and run, but you can also use a lighter when it gets too dark, crouch, and sneak. There's a mix of platforming puzzles to overcome by using these abilities, and occasionally you'll also need to escape from enemies who are chasing you, but if there's something that we'd criticise about all of this it's that the chase scenes are a bit overused towards the second half of the game. Also, while no two scenarios or puzzles are exactly the same, it still feels a bit repetitive at times, something that we never really felt with Inside.

How long do these nightmares last? Well, the game consists of five chapters, and you'll finish each in under an hour unless you get completely stuck somewhere. The last chapter is shorter, and skilled players who quickly grasp objectives intuitively will likely finish each chapter in about half an hour. In other words, it's a game you can finish in one sitting; an evening's worth of entertainment. There's not a terrible amount of replayability to be had, even if you likely won't hug all the nomes and break all the statues in your first playthrough, although there is chapter selection to allow you to go back and seek these secrets out.

Little Nightmares is a nice acquaintance, a game that perhaps shows the true calling of Tarsier Studios, who are best known for their work on the Little Big Planet franchise (they've helped on several main entries, and developed the Vita version). The ending feels a bit abrupt, and while we don't mind games that are shorter in length, some players will no doubt find Little Nightmares on the short side in terms of value for money. If, however, you're looking for a dark and troubled adventure to submerge yourself in for an evening or two, then Little Nightmares delivers.

Advertisements
Gamereactor UK
+
Wonderful gritty aesthetics, Dollhouse perspective works really well, Great use of audio, Great atmosphere and interesting theme, A cohessive whole.
-
Chase scenes get a bit repetitive, Not much in terms of replayability and fairly short.
is our network score. What's yours? The network score is the average of every country's score 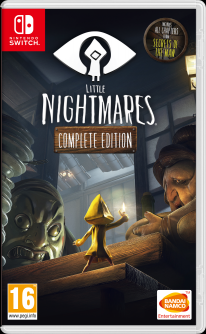