Controlling a Wii game is simple enough for most people. Point and click. Swing your arm, and pretend you are performing what you see on screen. It's intuitive and fun, but when Yuji Naka makes his first Wii game he goes for something even simpler. Forget about aiming and pressing buttons. Just put your Wiimote down and tap away with your fingers.

The concept is simple. Put the Wiimote face down on a cardboard box, any old box will do. And as your tap your fingers the Wiimote registers the vibrations. Weaker, stronger, slower, faster and in rhythm, but all five mini games in Let's Tap are controlled in the same fashion.

Yes, you read correctly. Let's Tap is another mini game collection for the Nintendo Wii and as such it is best played with friends. But let's start the run down of mini games with the best of the bunch - Tap Runner. Up to four players tap to make their runner come first to the finish line. Along the way there are hurdles you have to negotiate and you do this by tapping harder to make your avatar jump. The pressure of falling behind while tapping as fast as you can, but not too hard making your avatar jump at the wrong moment is nerve wrecking. With three friends Tap Runner is hysterical. It's a game of skill with levels full of obstacles and your living room with fill up with screams of joy and desperation from start to finish.

The next mini game is Rhythm Tap where you tap to the beat of music. Almost like Guitar Hero, but with a single note. This note is to be tapped not just in rhythm, but also with the correct level of strength for maximum points. When played with friends this is rather enjoyable, especially since the songs are designed in a manner where you sometimes take turns tapping. But you will soon grow tired of it, because tapping your fingers to the beat of quirky techno music is simply not that exciting, and to be honest I miss the Donkey Konga drums as I drum away with my index fingers.

In Silent Blocks the objective is to tap loose blocks that have been piled up to make towers. It's like a reversed version of Jenga. Unfortunately this is not much fun with friends, and while the version where you can combine colours is intriguing and captivating, this mini game lacks the speed and excitement of the others.

The fourth mini game is called Bobble Voyager where you control a character in a bobble in what most reminds me of an old school 2D shooter. Or a modern version of Nintendo's Balloon Fight if you will. You tap in order to float up and tap hard to shoot rockets. However, the controls don't feel precise enough for me to invest time in honing my skills.

With that it is time for the final mini game. But perhaps we should refrain from calling it a game. It is a collection of backgrounds that you can play around with and tap your heart out to. Make waves in a pond or create fireworks across the night sky. Rhythmic tapping will create special effects. Music, graphics and sounds flow together in a cosy, but rather pointless experience. Perhaps it makes more sense if you're under the influence.

And that's all folks. There is nothing more to Let's Tap. As a collection of mini games Let's Tap is above average in large thanks to the amazing Tap Runner. The only downside is that the 16 normal levels take under half an hour to unlock and while there are more, there should have been hundreds. And why not a level editor. That would have made Let's Tap an essential purchase.

Given its limited scope it is a good thing Let's Tap was released as a mid price game. If you enjoy playing Wii with your friends this is worth a closer look. Don't expect a game that will captivate you completely. Let's Tap is, as is the case with many other Wii games, a bit superficial. But the original controls, the stunning presentation and a few clever mini games make it a solid multiplayer experience.

Gamereactor UK
+
Tap Runner is fantastic, the originality of the controls, easy to learn.
-
Not enough game modes and variation, single player gets old fast.
is our network score. What's yours? The network score is the average of every country's score 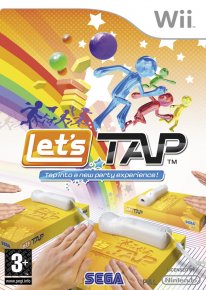