It's easy to dismiss the Lego titles from TT Games with phrases like "it's more of the same" and "it's probably good for kids". And to be honest that's how many game reviewers continue to tackle the long-running franchise. But if you dig under the surface, you'll notice that there has been a lot of progression over the years since the Lego game first appeared.

The last year has offered three games that have managed to really stand out on their own. Lego City Undercover offered an original storyline and was purely a single player game, Lego Marvel Super Heroes offered a wealth of abilities and characters, but returned to the classic co-op formula, while The Lego Movie Videogame offered something totally unique in that the whole game world was built with Lego blocks. As a result of this TT Games introduced manuals that you could collect, telling you how to construct certain things, and if you had real world blocks available you could build them yourself.

James Norton, senior producer on Lego The Hobbit explains that this feature was something they really enjoyed and that'll return in this game. In fact, he explains with a hint of pride in his voice, the team behind the game have built all the models themselves.

As the last year's worth of Lego titles proves, TT Games aims to implement a new focus in each every game in order to keep the formula from feeling tired and recycled. This is true for Lego The Hobbit as well. Norton uses one word to describe what's new: 'dwarves'. But we're talking changes that are more than just shortening the length of the character legs. More on this later.

As we sit down with the Dual Shock 4 controller in our hands to set out on the great journey of one special Hobbit, we're treated to the usual environments with blocks, Lego characters and that particular brand of humour sprinkled on top. The blocks don't make up as much of the landscape as in The Lego Movie Videogame; in other words this is a more traditional TT Games offering.

But let's return to the adventure at hand. We arrive at the Goblin village and a bunch of angry creatures walk across the screen. They angrilly throw their weapons on the ground and make angry sounds. There are axes, swords, crossbows, and... a red sausage. Obviously.

As we make our way up to the Goblin King for a mini-boss fight the first major change in the game mechanics appear. We need to shoot a box that the Goblin King holds up over his head, and, as usual, it's colour-coded to correspond to the ability of a certain character. But this time it is possible to move while you line up a ranged attack. This adds a far better flow to the action.

This is, however, not the major change we mentioned. As he drops the box following a well placed shot, two of our dwarves illuminate and are now paired up for a tag team attack. They grab a hold of each other, one climbing on top of the other and perform a body slam worthy of Hulk Hogan.

Later on as Goblins have formed a blockade, my two dwarves grab a tree and mow them down. Even later on four of my dwarves will climb on top of each other to create a ladder of meat. Co-operation has been integrated into combat and puzzles to a much larger degree.

If you're tired of mindlessly mashing a button you will be glad to know that each of the characters come with a special attack that is charged by holding down a button. It's still very much the simple system that we're all used to, but this adds a layer of depth that should appeal to players who want something a little more tactical.

The so called minibuilds that were introduced in The Lego Movie Videogame make a return, and allows players to solve smaller puzzles by building simple Lego models and make use of them.

The developers promise around eighty characters in the game and double that amount of side-quests. So there should be enough content in there as the game covers the first two movies of Peter Jackson's trilogy. Lego The Hobbit is expected to release in late spring and includes all the original voice talent including Christoper Lee (Saruman) as the narrator.

If you're longing for yet another adventure built with blocks, Lego The Hobbit looks like it will follow suit in a line of great games that offer both familiarity and new ideas.

Lego Lord of the Rings games pulled from stores

A vigilant Reddit user has noted that Lego The Hobbit (2014) and Lego Lord of the Rings (2012) have been removed from Steam and other digital stores. This means they are...

Humble is giving away Lego The Hobbit for free

We've got yet another freebie to tell you about today after Humble just started handing out free digital copies of Lego The Hobbit. All you have to do to bag this free...

Lego The Hobbit won't be concluded

The Battle of the Five Armies won't make an appearance as DLC or as a full game.

Rumour suggests that extra content will come at the end of the year. 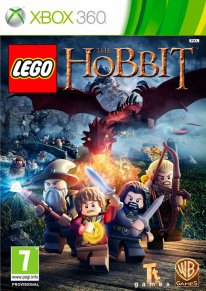