Harmonix and MTV Games are teaming up with TT Games and Warner Bros for Lego Rock Band this winter. Developed by TT Games (Lego Star Wars) the game will feature a more family friendly line up of songs and bands and the humour and customization Lego games have become known for.

Five songs are confirmed at this stage:

Here are a few quotes from the press release:

"LEGO Rock Band combines two compelling properties and creates an experience that family members of all ages will enjoy playing together as a group," said Tom Stone, Managing Director, TT Games. "Harmonix and MTV Games are the world experts in music gameplay, and we're genuinely thrilled to bring the unique and humor-filled LEGO experience to their Rock Band universe."

"We're thrilled to offer another LEGO branded gaming experience that will deliver humorous and social play for families and friends," said Henrik Taudorf Lorensen, Vice President, the LEGO Group. "LEGO Rock Band is built around the same values of imagination and family-friendly creative role play that is present in other LEGO videogames. It will deliver innovative new elements of game play that complement the fun of the Rock Band experience."

"Rock Band is a social game experience that crosses every generation and every genre of rock," said Bob Picunko, Senior Vice President of Electronic Games for MTV Games. "Harmonix and MTV Games are big fans of the LEGO game franchise and excited to work with TT Games to develop a new take on Rock Band that focuses on great music and LEGO humor that's fun for the whole family."

From All American Rejects to The Zutons

Bare chest and everything!

A family friendly and blocky experience 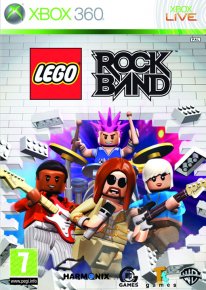