I must admit that it has been a good while since I let my imagination run wild with multi-coloured lego blocks. I must also admit to not being caught up in the Lego game craze that much of the world has been caught up in for years, but that may very well change in the near future.

A short flight and an even shorter cab ride from the airport in Manchester and I find myself in a sleepy English suburb, home to the developer behind the many popular Lego titles - Traveller's Tales. Producer Phillip Ring introduces us to the latest addition to the Lego family of games - Lego Pirates of the Caribbean.

It's such a natural fit, and as the first video from the game begins it quickly captures my attention. While Lego Harry Potter: Years 1-4 wasn't exactly my cup of tea, and Lego Batman, Star Wars and Indiana Jones never really caught on with me, it's impossible to resist Johnny Depp's Captain Jack Sparrow in all his blocky grandeur.

The trailer starts with a beautiful Lego rendition of one of the most iconic scenes from the first movie, where our beloved Jack races to shore on a sinking ship and avoids getting his feet wet by clinging on to the top of the mast. Since the ship is made entirely out of Lego blocks, you can see how it breaks apart block by block, but as always it is Jack who entertains and impresses the most.

The little Lego characters you may have in your collection have a hard time pulling off facial expressions, but in the hands of the British developers the expressions of the larger-than-life pirate come to live much like they do in the movies as if the plastic sprung to life. His characteristics are all there, and he seems generally lost and unsure if he speaks the same language as those around him.

But Jack isn't the only character who is true to his movie self. We are also show a level, taken straight from the film. Jack attempts to break into the house of a sleeping smith, who Will Turner works for. We get to control Will, and our objective is to catch Jack by rebuilding the smith's equipment, riding a donkey and throwing yourself into a swords fight. The scene also allows the developers to show off two of the new elements in the game, namely the "sticky platforms" from which you cannot fall down, and these in turn lets us focus on the sword duels, that are another big feature where you can parry and dodge incoming attacks depending on how difficult your opponent is.

Much like the previous Lego titles Lego Pirates of the Caribbean will let us play as a whole host of characters from the movies, and in total there are more than 70 characters to unlock as you play the game. That number in itself may not be that exciting, but most of the characters will have their own unique abilities, making them perfectly suited for certain situations. Hector Barbossa and his men, can for instance walk on the bottom of the sea (and moonlight will turn them into skeletons), and therefore you are encourage to switch out the members of your three man team in order to find all the secrets in each of the levels.

Instead of just focusing on the first film, Lego Pirates of the Caribbean will cover all four movies, including the upcoming "On Stranger Tides", so naturally we didn't get to see any later levels, but this also means there will be lots of pirate stuff to explore in the game.

Over the years Traveller's Tales have perfected the art of transitioning well known film franchises and characters to video games built with Lego blocks. And this is something that is truly on display in their latest effort as it really looks as if they have managed to capture what made Pirates of the Caribbean special. For long time fans of their games, most things will have a familiar feel to it, but the experience the developer has had also means they can polish up the graphics, work on the delivery of the jokes, and design better missions, but the star of the game is Jack Sparrow and who wouldn't want to take control of him? That's the main reason why we are excited about getting our hands on the full game and experience all four movies, Lego style.

GRTV bring you their review

GRTV talks to the producer

A couple of new screenshots for you

PREVIEW. Written by Thomas Blichfeldt (Gamereactor Denmark) on the 9th of February 2011 at 14 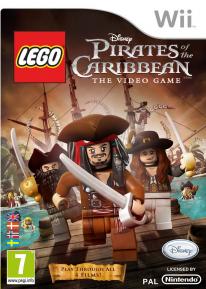