They weren't particularly good games. Things gradually got better though, in particular Lego Batman 2: DC Super Heroes showed that TT Games were no longer satisfied with simply reproducing a known license in the square universe - and were ready to fill their games with variety as well as fun.

It is a development one notices right away in Lego Lord of the Rings, because even though the game obviously consists of all the components which eventually served as foundation pillars for all Lego games, there's plenty of the new as well, more so than any of the franchise previous.

The game follows the trilogy to the letter, and fans will find it hard not to smile as some iconic scenes are replayed for laughs. Jokes festoon the game, but rarely beyond credibility. Everything's just more accommodating for younger players.

Lego titles let you freely switch between characters when you want, and those in your gradually swelling fellowship have different abilities. Samwise, for example, can ignite fires with his lighter. Character abilities are tools needed to overcome the many tasks - though the severity of these puzzles require only, at most, a few minutes of pondering to solve.

This latest Lego adventure has certainly soaked itself in the RPG genre; there's moments clearly inspired by the non-linearity and expansive quest options of the role-playing field.

In the many places discovered, there's puzzles to solve, bonus objects to seek, characters to unlock. Map Stones provide not only a overview of the local area, but serve as a solid travel system. Many side-missions entice, while a local blacksmith is always happy to craft new gear once you've found the necessary components.

Crafting a really nice addition to the experience, and pushed me to explore further into the surrounding areas in hope of finding items that the blacksmith could make use of.

There are a total of 84 different objects that can be wrought, and their effects are very different. Some will give more potent attacks, while others will be used to solve side missions. The most useful rewards new skills for your heroes, so that the selected characters will suddenly be able to perform virtually all roles in the game.

Tolkien's fantastical world, like in the previous Lego Batman 2, allows TT Games to experiment with an open game world, and it's a success. If you so should need it, the adventure's ready to guide your hand forward, but also lets you explore the wilderness at your own pace.

The illusion of freedom's good, and there's plenty of attractions and surroundings to enjoy, though it doesn't hit the numbers you'd see in an adult RPG.

But it's another step in the right direction for the developer, and the lushness of the environments testifies to the fact the technology's still being optimised for each game. Additional plus points must be given for the voice tracks, lifted direct from the movies (though at times the sound quality seems volatile.)

Unfortunately, it is also the technical side of the adventure that cause the biggest problems. The frame rate was iffy when the going got tough, though not to a degree that was detrimental to the experience. Subtitles had trouble keeping up with the action (solvable by a game install onto your hard drive, as we did with the Xbox 360 version we were reviewing on).

Lego Lord of the Rings is a tremendous experience for players of all ages, and a safe Christmas hit for fans of the film trilogy. There's enough new ideas, and the same fabulous co-op features and option to explore previously-visited areas of secrets, which are mainstays of previous Lego games. In other words: we're quite ready for another fine (and square) adventure.

Gamereactor UK
+
+ Loads of content + Easy for all + RPG elements work + Semi-open game world + Lots of secrets
-
- Some technical difficulties - fluctuating sound quality - recycling from previous games
is our network score. What's yours? The network score is the average of every country's score

REVIEW. Written by Thomas Blichfeldt on the 5th of December 2012 at 14

Lego Lord of the Rings out on iOS

Lego Lord of the Rings on Mac

Lego Lord of the Rings dated

LotR adventure due next month.

GRTV: Lego Lord of the Rings

We talk Mordor with game's producer.

Lego Lord of the Rings pics

GRTV: Lego Lord of the Rings

We preview the upcoming game. 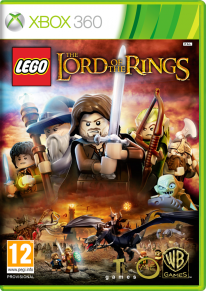