The irony in that when writing about another entry into the Lego series is not lost on me.

And this Lego game is confusingly similar to many of the earlier chapters. Yet - and yet, its hard not to surrender when you sit in Traveller's Tales latest charm offensive in form of Lego Harry Potter: Years 5-7. The developer has taken the best scenes from the series' last four movies, and translated them into playable missions where again you need to explore and solve puzzles.

Each film's block adaptation is so detailed that not only will it reward those who have watched the movies, thanks to a generous amount of detail in every respect, but will also be of gameplay benefit; solutions to puzzles will come more clearly to those with knowledge of the original source material

You can still take all the time you want to explore Hogwarts between tasks. The school itself is dauntingly filled with rooms, short assignments, funny quirks and many secrets. It is therefore not inconceivable that you will spend as many hours here as in the actual missions.
Likewise the areas around Hogwarts are also open for exploration. Dark Forest and Hogwarts Observatory bonus locations to compliment the main mission structure.

The studio has worked hard this time to tighten the level designs, making them more coherent and lessening the chance of encountering tasks that seem out of context. However, you still will be smashing the environment to collect Lego pieces which serve as money and building blocks for build various widgets.

Harry and his friends have regained access to different spells for a multitude of uses, such as giving life to plants, cutting things out in special red Lego blocks, and summon pets to access special sections.

A whole new element is that this time you must duel against different special opponents. You're both trapped in a magic circle and must choose the right incantation to hit your foe, while a shield provides the ability to block an enemy attack. It's a relatively simple but fun approach that shows that there still new things to show in the Lego world.

As in virtually all of the previous Lego games, Lego Harry Potter: 5-7 works best in co-op. The clever use of split-screen, cutting the image in two as players wander from each other seamlessly in still in place, and still works fine, and the drop-in/drop-out system is there for those of short attention spans.

There is little doubt that Traveller's Tales has gradually mastered the mix that requires making a successful Lego game. What would be a negative comment on so many other developers only serves here to show how the studio is attempting to outdo itself.

Yes, you know in advance how Lego Harry Potter: Years 5-7 works, but it's still fun and perfect whether you are an expert player or beginner. Further, its rammed with so much content that you will need to use insanely long hours to find the more than 200 different characters and secrets after you have completed the lengthy main story.

The Lego version of Harry Potter is - again - not looking to be a gaming revolution. Its but an enjoyable adventure that can be played and enjoyed by all regardless of previous playing experience. That it even has enough content to keep most caught up into the new year just makes it even more obvious as a potential Christmas gift.

Gamereactor UK
+
Lovely co-op. Good reproduction of the films. Lots of humour. Incredibly, many hours of playing time.
-
It's almost all seen before, and often seems too familiar.
is our network score. What's yours? The network score is the average of every country's score 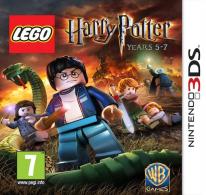