"As with previous titles in the franchise, Lego City Undercover is a fun game. But unlike those that have went before, it's not a crazily entertaining one."

The Chase Begins to launch end of April. 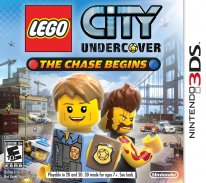