Counterplay Games is working on Godfall for the PlayStation 5, which is exciting enough in itself, and this was ramped up even further when an alleged trailer was leaked claiming to show the game in action, although Counterplay has added a disclaimer about the leak.

"We can confirm that the circulating trailer is year-old PC footage used as part of an internal presentation," the team writes on Twitter. "We are energized by your excitement and look forward to showing you just how far this game has come. Stay tuned for a more detailed look soon!"

Regardless of the age of the footage, it has certainly gotten players excited about the project, which was unveiled at The Game Awards last year as the world's first game for Sony's next console.

Don an armour of light and face formidable foes, in Counterplay Games looter-slasher.

Godfall is coming to PS4 in August

And it's bringing a new expansion called Fire & Darkness.

Godfall has been age rated by PEGI for PlayStation 4

It was previously believed that the game was tailored just for PS5.

The PS5 launch title has our full attention on today's stream.

This launch trailer leaves lots to be excited about for the title created by Counterplay Games.

Godfall's PC specs have been revealed

Players will need a pretty beefy machine to play the looter-slasher.

Godfall will launch in November along with PS5

Fornite and Devil May Cry 5 Special Edition have also recently been announced to be arriving on day one of the console. 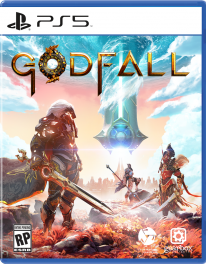