Earlier this year Bloober Team (developer of horror games Layers of Fear and Observer) teased that their next project was called Project Méliès, and now we have official confirmation that this is Layers of Fear 2, courtesy of a brand new trailer.

From the trailer we gather that, while the first game was about artistry in painting, this seems to be about filmmaking and possibly acting, although there's just as much horror and madness, as evident by the hands coming out of the walls. We also get a lovely logo for the game reminiscent of the text on old posters for horror films (like The Invisible Man). The projector clicking and the bordering on the title screen while zooming out from a theater stage is all reminiscent of the Lumiere brothers too.

As reported by PC Gamer, Tony Todd is the narrator of the experience, who has worked on horror films like Candyman in the past.

An official website has launched too, but we don't know the release date as of yet. One might assume it'd be on the same platforms as the original - PC, PS4, and Xbox One - and perhaps even Switch considering the original's late arrival on the platform, although that's less guaranteed.

What do you want to see from this spooky sequel? 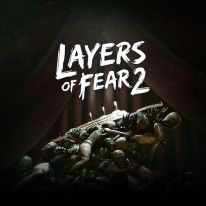