Layers of Fear 2 was unveiled last year by Bloober Team, the same developer who made the first game and Observer, and aside from a disturbing trailer back in January, we actually don't know a whole lot about the game. That's why we were eager to talk with Gun Media's Wes Keltner at PAX East, to hear about what the goals are this time around.

"Well with Layers of Fear 1 that was primarily about paintings and fine art, it's definitely a psychological horror experience," he explained. "The second one is an entire new story, so it's not like it picks up where part one left off, it's not like that; new story. It focuses primarily on film [...] a lot of horror references are found within, going all the way back from like Nosferatu [...] that's within the colours and the actual environments you're walking around in, so that's what we were most excited about when we met with Bloober Team, because we're big horror people as well, so when we saw the direction they were going with part two, we were like 'oh my gosh, what can we do to help you guys?', like we're totally, totally in with that."

"But you're still gonna see that same kind of psychological horror, some of those jumpscares that you're used to seeing from the first one, they're gonna be in there. It's got a little bit more content than the first one, so you can expect more like a 9 to 10 hours worth of playthrough, depending on how good you are at solving some of the puzzles and things that you find in that."

What would you like to see the sequel do differently? 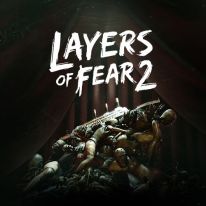