Metal Gear Survive was announced at Gamescom today and more details have since surfaced regarding the upcoming game from Konami.

Firstly, Metal Gear Survive will be coming in 2017. In terms of gameplay, the focus is around stealth and using co-op teamwork (up to four players) to survive and manage what were referred to as "massive threats". This will involve new gear and mastering this equipment, one such addition being the Catherine Wheel arrow.

Regarding plot, there wasn't a lot to go on but Konami showed a team of Mother Base survivors pulled through a wormhole in a desert. The game takes place after Ground Zeroes but, confusingly, it is in an alternative timeline generated by the wormholes. Undead-esque creatures were also shown but the term 'zombie' was never used.

It won't be a full price game but no further details or clarifications were given by Konami on this front. We'd predict it to be a mid-priced title, but ultimately that's speculation on our part.

"Survive is good, but certain features combined with the messy divorce with Kojima really has tainted it for some fans."

We've been putting the game through its paces.

Shots fired with a hidden message in Metal Gear Survive

It's all about Kojima's departure.

You need to pay for second character in Metal Gear Survive

Or you will have to delete your main.

They're not as hefty as they could be.

Try before you buy the new Metal Gear spin-off. 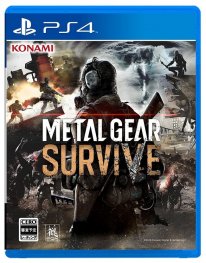