Kirby Fighters 2, the successor to the 3DS original, is pretty much what you would get if both of Sakurai's most-beloved creations had a baby. It's a colourful and adorable brawler that sees of all of Kirby's multiple personalities go to war with one another. It made for a surprise shadow launch last week and its arrival helps to pad out what has been a rather lacking winter line up for Nintendo Switch this year.

The core mode within Kirby Fighters 2 is its Story Mode, which sees Kirby fight his way up the top of a seemingly-endless tower to take down both long-time rivals: King Dedede and Meta Knight. The story is split into four chapters and each sees you climbing the tower further and further and challenging increasingly tough foes and bosses. The story admittedly is a little bare-bones here, as it is presented through text and still images. I also found the boss battles to be fun and challenging, but encounters against Whispy Woods and the aforementioned evil duo were just lazily repeated.

Helping to squash the repetition of completing several battles in a row are different stage conditions and stickers that you'll get to select between on each floor. The stage conditions have temporary effects such as increasing movement speed and altering the potency of healing items. The stickers have a more permanent effect and there's actually some strategy required when planning out which you want to select, as you can only select between one of three presented. For example, choosing a healing item may help you survive in the next fight, but it won't have the longterm benefits of a strength buff.

Alongside the Story Mode, there are three others: Online Mode, Battle Mode, and Single-handed Mode. We tried to jump into a game to test Online Mode but we were unable to join a match due to a lack of active players. I found this to be surprising given how close it was to launch, and this area is where I could have imagined the game really flourishing. Luckily, however, there is still the option to set up private online matches with your friends. The Battle Mode, on the other hand, is your typical casual mode where you can freely set up your own matches in both single-player and multiplayer. Finally, Single-handed Mode is different, as tasks you with taking out your opponents in the fastest time possible.

Combat is unlike Super Smash Bros. in that it is more cooperative focused and fights are won by throwing punches and draining your opposition's health bar. Players can jump and hover in the air (like Kiby can in Smash Bros.), they can suck each other up, and have a series of special attacks that are triggered by pushing B and the directional buttons. Once your health bar has been depleted though you aren't completely out of the match as you'll roam around like a ghost and can revive yourself with a smidge of health by landing a hit on a foe.

There's more of a cooperative focus here as Fighters 2 sees you partner up with a buddy of your choosing to take on your opposition and their friend. Players can "smooch" each other to regain health, and the match isn't over until both you and your opponents have been reduced to ghost form. Items also play a massive role here and can often help secure you victory or pull you back from the edge of being knocked out. There are also items of food that Kirby can scoff to regain health and offensive items, such as Bombers and Cracklers.

There are a total of 20 stages present within Fighters 2 and these are taken from different entries from throughout Kirby's platforming career. What I really liked is that the stages feel like a real celebration of Kirby's history, as some stages, such as Bubbly Clouds, showcase a retro 16-bit aesthetic, whereas others like Green Gardens are more representative of Kirby's most recent outings. These stages also feel distinct, with their own different hazards to avoid. Waddle Dee Train Tracks, for example, features a charging train for you to zip out of the way of and Springy Hand Land has giant hands that will slap you in the face if you are not careful.

It's the copy abilities that pad out the roster but there are a few characters that you can play as that aren't exclusively Kirby. Despite all characters obviously looking the same I found them to have some really fun and creative moves. Artist Kirby can paint pictures that leap out of the canvas and attack foes, and Whip Kirby can damage foes by rapidly slinging his whip around like a tornado. There's even a brand new copy ability here that is exclusive for the game and that is Wrestler Kirby, which can grab and slam is opponents down to the ground in a hilarious fashion.

Unlocking characters, levels, and items to be used within the story is done through a progression system known as your Fighters Rank. You earn XP for tasks such as playing online and advancing the story, then each rank you achieve rewards you with something new. This on paper sounds like a fun way to incentivise players to keep playing and give them something to keep working towards, but in actuality, it is a massive slog of a process. In total there are 100 different ranks for you to achieve and it will require hours upon hours of solid playing just for you to be able to access all of the characters and stages.

Kirby Fighters 2 was a pleasant surprise; it's a cute and accessible brawler that does plenty to celebrate the pink puffball's legacy. Its mechanics are easy to grasp, its stages are representative of the series' entire history, and its cast of characters manages to feel distinct despite 90% being different Kirby copy abilities. It is disappointing, however, that progression feels tedious and online play is practically dead at the moment, but I'd encourage you to push these flaws especially if you're a fan of both Kirby and Smash Bros.

Gamereactor UK
+
Its copy abilities feel distinct, the stages are creative and represent Kirby's entire history, its combat is simple to grasp and understand.
-
Online play is pretty much dead, the story mode feels lazy in places, progression through the Fighters Rank system is awfully slow.
is our network score. What's yours? The network score is the average of every country's score

"It's a cute and accessible brawler that does plenty to celebrate the pink puffball's legacy."

The colourful brawler dropped directly after its official announcement.

Well, that was pretty unexpected. 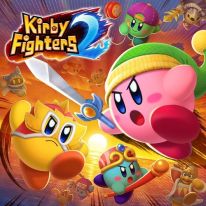