At PAX East we got to catch up on what's going on with Warhorse Studios' Kingdom Come: Deliverance with upcoming DLC, and here we got to talk to actor Victoria Hogan who plays Theresa in the game, where we hear about the direction this additional content is taking her in.

"So Theresa, when you meet her at the beginning of the game, you have... you have an understanding that she went through something difficult, but I think she puts on a brave face for Henry and for the people around her, because she wants to remain strong," Hogan explains. "What you see in this DLC is everything that she went through, all of the details that led up to how we meet her in the main game, and it was an incredible opportunity to get to play it. I t was at times really, really hard, because Theresa went through the wringer, like I called the DLC 'Theresa's very, very, very bad day'. It's just like a lot of hardships."

"But it was really fun to have her be a bit more independent. She got to stand up to people more, we get to see more of her personality, and these little glimpses of Theresa sort of being like snarky or kind of funny or tough with Henry; we see what made her that way."

We also talked to Warhorse's Tobias Stolz-Zwilling about the DLC pack, where we find out it'll be around 15 hours long. Do you like this focus on Theresa? 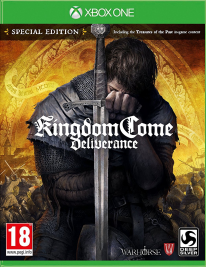