You'd have thought our hunger for role-playing epics would've been more than satiated by now, following The Witcher 3: Wild Hunt and just recently The Elder Scrolls V: Skyrim Special Edition. Yet here we are, salivating at the thought of digging deep into Kingdom Come: Deliverance, the historically accurate tale of political strife in 15th Century Bohemia. Sure, this doesn't have quite the same ring to it as monster hunters and dragon taming (and riding), but one step inside the medieval Czech Republic village of Stříbrná Skalice, and it's hard to look away.

After seeing the game in action during a demo presented by Warhorse Studios' Tobi Stolz-Zwilling, it was initially hard to focus on his words owing to how genuinely taken aback we were with the world's beauty. Something about King Sigismud. Something else about an imminent invasion. Need to get some coal for your dad... heck, look at those horses, check out the trees, the muddy trail that twists and turns through the pretty village. Just... wow.

At some stage, the hero (Henry) is likely to become embroiled in the regional uprising, but to begin with all we need to know is that he's a feeble son of a blacksmith, running errands.

Essentially what we saw during Tobi's modest though cheerfully confident presentation was the tutorial section from the most recent build of the game. As a microcosm of the glories to come, the proceedings served to highlight how loosely, in a good way, destiny draws Henry inevitably to its bosom. Henry's tale begins with the first task set by his father; to retrieve a small debt from a village ruffian called Kunesh. There's more than one way to achieve this objective, one of which involves breaking into Kunesh' house to grab what's rightfully yours.

Tobi, though, used this opportunity to talk about combat in a long drawn out scuffle twixt the two lads. The fighting system is complex, and ultimately leads to the skilful wielding of blades and shields whilst armour-clad. But beneath all that, Kingdom Come: Deliverance barely boosts the hero's core capabilities. The person that learns how to fight and to feel mighty is you, the player. If you can never land a hit and dodge effectively while unarmed, what chance do you stand on the battlefield when the time comes? The answer is n-o-n-e.

So much of what Kingdom Come Deliverance offers is historically informed, to the extent that the dual with Kunesh is fought with the palms of their hands, which was the correct way of striking an opponent to avoid breaking your fingers. Escalate this much, much further and we see soldiers in armour smashing the living daylights out of each other using every section of their swords, rather than just swinging in a heroic (basically false) fashion. Tobi didn't go much deeper into the details of combat, but now we want to know more.

Back to the story, and gradually Henry finds a way to prise the money out of Kunesh's clumsy hands, without suffering the embarrassment of returning home empty-handed, asking his father for help. The intention is that Henry must face the consequences of his actions, not to the roguelike extent in which death is permanent and time cannot be turned back; you can still quick-save, though there is a fun mechanic to discourage this. Consequences make Henry a better man, and eventually a hero that you'll feel much closer to having learned from many mistakes. You'll need to think carefully before accepting the help of those that offer it too freely, aware that this may require something personal in return, even if it's only a mark against your reputation. At one point during the demonstration, Henry has the chance to gain some foolhardy allies that might've helped with his persuasion of Kunesh. They make no secret of being up to no good, however. The choice is always yours, so make it wisely. Practice conversation skills to boost powers of persuasion instead? That could work too.

Whichever round-about way you decide to impress dad, the outcome for the purposes of the story amounts to the same for Henry. His father is crafting a magnificent sword for a local lord, but it transpires that the man is prevented from claiming it. Tragic events lead to Henry coming into possession of the new sword, and in the process the will to use it, and to use it well.

For as much as Kingdom Come Deliverance allows players to freely explore all the options, so that your experience can be different to ours, essentially it is a story-driven adventure. Given only a taste of what to expect from Bohemia; its countryside, authentic architecture, intriguing fashions, and the presence of historical figures to provide this sombre backdrop, we found ourselves sincerely and wholeheartedly engaged. Sadly, we have until 2017 TBC to wait.

Interestingly, Warhorse Studios is offering PC gamers the chance to support the studio by pre-ordering Kingdom Come: Deliverance at full price in exchange for access to the ongoing Beta. You can pay between $49 and $499 to claim the eventual physical release package of your choice. If you'd rather wait to learn more about the game there's a healthy playlist of videos on its YouTube channel, and Tobi is meanwhile very active on Twitter @T0_8I.

So, our heartfelt apologies to those of you who thought after The Witcher 3 and Skyrim that your work for this generation of RPGs is done. Not even close. Check out Warhorse Studios for regular updates on Kingdom Come: Deliverance. Come thank us later. 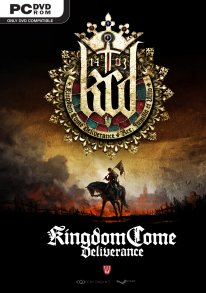