Promises broken and expectations shot down. Sony did a great job developing the Vita, the most lovely little thing they'd ever made. Equipped with tremendous power, in part even rivalling the PlayStation 3, and the much requested second analog stick. No more half measures, actual sticks. The path to a proper portable first person shooter was wide open.

Only it didn't happened. The first person shooter landscape on Vita has been a bitter disappointment. Sony released Resistance: Burning Skies, a game that failed to showcase the power of the Vita. Shortly thereafter we suffered Call of Duty: Black Ops Declassified - a game that Nihilistic Software apparently threw together during a few hectic months. And that's pretty much the first person shooter action we've seen on Vita. Utterly underwhelming.

This September we're getting a third shot at a decent first person shooter on PS Vita with Killzone: Mercenary. Guerrilla Cambridge (formerly Sony Cambridge Studios) have been tasked with delivering an authentic Killzone experience for the Vita. That means accurate controls, intense action, and above all stunning graphics. Exactly what we were promised early on with PS Vita.

I've played a few hours of a preview build of Killzone: Mercenary and the first impressions are positive. Very positive in fact. Guerrilla have sought to create a hybrid of a traditional first person shooter and an arcade title. The idea is to make Killzone: Mercenary enjoyable in short spells, by focusing on a higher pace with currency and high scores as the player motivation.

It doesn't take long before I realise just how technically impressive the game is. I felt, and still feel, that Uncharted: Golden Abyss was a disappointment as far as visuals go simply as a result of the low resolution. Watching Nathan Drake make his way through a flickering world removed some of the sense of adventure and PS Vita haven't truly shown its power in my opinion. That is until now.

Helghan looks just as vile and horrible as it should when you take the role of a soldier for hire cleaning house with those orange gaze baddies. For hire is key here. You're simply in it for the money. A mercenary. A money plays a large role in the game. Each time you kill an enemy you score some cash, headshot gets you a bonus and there is a multiplier that kicks in if you hit a spree. You even loot the bodies afterwards for extra cash.

This actually transforms the whole experience. Those who want to stay back behind cover and pick off enemies patiently won't be rewarded. Instead you're forced to push the pace and string kills together. This is also perfectly suited to portable gaming, since it makes for more intense, short sessions. You have enough time on the bus to kill quite a bunch of enemies, and since the missions are very straight forward you'll never run the risk of losing the plot.

As a mercenary you're responsible for your own equipment, the money you earn are spent on armour, guns, ammunition and gadgets. And you're going to need them as Killzone: Mercenary proves more challenging than previous entries in the franchise. You're constantly under enemy fire and Helghast seem very eager to end your days. The combat reminds us of the most hectic sequences of the more recent Call of Duty titles where quick reflexes are required.

It should be noted that I've played a preview version, and there is some work left to be done, but the artificial intelligence still leaves something to be desired. There have been a few too many instances where Helghast have made stupid choices in the heat of battle for our liking.

A PS Vita is not equipped with as many buttons as a Dual Shock 3, which has forced Guerrilla Games Cambridge to make use of the touchscreen and rear touch pad to accomodate for all features. Even if they've sadly resorted to some gimmicky mechanics like swiping the screen for melee attacks or pulling levers it works well for the most part. Throwing grenades is a simple matter as the icon is placed right next to the face buttons.

The first mission Killzone: Mercenary feels like welcome rain shower for the draught plagued PS Vita landscape. It's a game that truly shows that Sony's ambitions of delivering true PS3 experiences on the go is possible. Sadly no multiplayer was included in our preview version, but this is a very promising game PS Vita owners can look forward to. 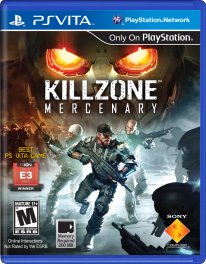