Danganronpa as a series is relatively niche, as the first game, Danganronpa: Trigger Happy Havoc, was released all the way back in 2010 on the PlayStation Portable and PS Vita. However, fans who had never experienced it before were able do so this year via a collection of the first and second games for the PlayStation 4. Since the release of the first game there has been a number of new entries, and the game has slowly crept out of the world of handheld gaming onto the PC, PlayStation 4, and even mobile.

For those who don't know what the Danganronpa series is, each game focuses on a group of school children as they are forced into a survival situation by a sadistic bear called Monokuma. He traps these kids in a certain place, whether that be a school (like in Trigger Happy Havoc) or a tropical island (as in Goodbye Despair), and then proceeds to tell them that they can only escape by murdering a fellow student. Add to this the fact that killers can only escape if they aren't found out, and that class trials exist to determine who is a killer or not, and you've got a bubbling pot of paranoia, suspicion, and investigation.

In London we were recently given a demonstration of Danganronpa V3: Killing Harmony, the latest instalment in this bizarre and gripping series, and during our time there we were also joined by series creator Kazutaka Kodaka, who was experiencing his first time in Europe. We sat down with Kodaka to talk about what fans can expect from this latest game (with the help of a translator), as well as witnessing for ourselves what the game has to offer.

Before we started getting into the game, though, we had to ask Kodaka how he was enjoying his first visit to Europe, as he had been in Paris for the Japan Expo the week before. "Yeah, it's great," he told us. "I got here by aeroplane, so like a 12-hour plane ride and I am incredibly tired. I hate aeroplanes so that was not a lot of fun. It was a lot longer than I expected."

We then got onto the matter at hand: Danganronpa V3: Killing Harmony. Although we in Europe will be waiting until September 29 to get it, it has already been released in Japan as of January. When we asked about the reception to the game, Kodaka was hesitant to give too much away, as he's very guarded when it comes to spoilers, but assured us there's quite a bit to be excited about.

"Danganronpa is a game and a series where it lives and dies based upon the spoilers and the twists and turns that it has, so without spoiling anything what I can say about Danganronpa in Japan is that it is the Danganronpa that has brought the biggest reaction from the fans in terms of that twist area," he teased.

V3 will add some new gameplay elements to the mix when it returns as well. During Class Trials, for instance, which are sessions where evidence is used to discuss who's responsible following a murder, Truth Bullets could previously be used against statements if players were telling a lie, but now Lie Bullets have also been thrown into the mix as well. These allow you to break conversations with a false counter, adding a new element of deception to the game.

"So within this game in particular lying's a big thing, and as you mentioned there's something called the Lie Bullets," Kodaka said when asked about these Lie Bullets. "Up until now, you had to tell the truth in order to advance the class trials and move things along, however, in this game you're going to be required to lie at certain points to advance the game. This comes up in the class trials as well as the other parts of the game, so much so that the entire theme of the game, everything surrounding it, is about lies."

Lie Bullets aren't the only new thing to be added to the series in V3, as these Class Trials are also being spiced up in a number of other ways. Mass Panic Debates, for instance, are when multiple characters are speaking over each other, making it hard to keep track of what's going on, and there are also debate scrums where groups argue against one another. As if finding the truth wasn't hard enough, now there's a lot more to contend with in this pursuit of facts.

New mini-games have been added as well, like Excavation Imagination to reveal an illustration by removing blocks; Brain Drive is where you drive a car to collect letters for a question they must answer afterwards (something that's shown off in the gameplay video within this article); and Epiphany Anagram 3.0 where you have to pick out letters for a question using a light.

As a whole, Danganronpa V3 has been marketed as 'psycho cool' this time around, as opposed to the 'psycho pop' tag of the first game or the 'psycho tropical' of the second, and this is something we also asked about.

"So, yeah, originally the first game, we called it 'psycho pop', and it's been seven years, about seven years, since that game was first released in Japan, and the player has grown up a little bit," Kodaka explained. "So they've grown up, they've matured, they've become more cool. So we changed the theme from 'psycho pop' to and now it's 'psycho cool', and that's what that represents at least."

We were also curious about whether this game was a sequel or something entirely new, something that Kodaka wanted to clear up: "If it's come out that I said it's half new half old, I feel that's a bit of a misinterpretation. If you look in Japan at the posters and everything surrounding it, I've clearly tried to state that this game is something entirely new and so I'd like to say here, now for the record, that this is an entirely new Danganronpa."

Since Danganronpa started its life on the PSP, before moving onto the PS Vita, mobile, and eventually the PlayStation 4 and PC, we asked Kodaka whether he believes consoles like the Switch have somewhat replaced the Vita in the market, as a lot has changed in terms of the handheld and console market since the first game came out in 2010.

"I don't necessarily think that Switch is a replacement for anything, or even can be really considered a portable game machine," he responded. "I think Switch has its own merits and has its own interesting points to it, and I feel that it also attracts perhaps a different user base. And I feel that Switch should also continue to head in a different direction, and not just seek to replace what's already on the market in terms of handhelds."

Another thing that's grown in recent years is YouTube and the practice of so-called Let's Plays, where players film themselves playing a game and broadcast it to their audience, commentating as they play. This is something that Danganronpa has experienced as a series, and Kodaka seemed to have mixed feelings towards it, as it all comes back to that question of spoilers again.

"So actually we've created it so that there is a recording block at the end of Chapter 1," he said. "That's because, the type of game that this is, is it's very, very story-focused, so much so that the game is dependent upon its story, and we really want people to play and enjoy that for themselves as they pick up the games. So up to a point, it's perfectly okay and great that people play the game and introduce it to others on YouTube, but at the end, we really, really hope that players are able to experience all the twists and turns that Danganronpa offers for themselves."

Hardcore fans of the Danganronpa series will no doubt know that the series isn't just confined to video games, as there has been an anime series, novels, manga, merchandise, and more to supplement the games, a lot of which Kodaka himself has helped produce, although when we asked about whether he ever had any intention to make V3 an anime series, he said that his intentions were always to keep it as a game.

"No, I did not [consider it]. As you might be aware, last year in Japan the anime came out, and what the anime Danganronpa 3 is, it's a completion of the story that started and continued through Danganronpa 1 and 2. And then in contrast to that you have the entirely new Danganronpa V3, and even from the really tiniest stages I had intended it to be as such, so at no time did I conceive of this game as being an anime," he told us.

This brought us to the topic of influences, and while not giving any specifics, Kodaka did tell us that a number of "games, anime, manga, and movies" have contributed to the Danganronpa series. What these could be, though, is a mystery.

Before we concluded our interview, we had to ask one final question, which was about the 'V' in the title, which has in the past been said to stand for victory. He told us that the explanation for this is twofold, and involves tokusatsu, a genre of film and television revolving around special effects, usually in regards to fantasy or science fiction, and specifically the tokusatsu "V3", which we took to mean Kamen Rider V3, a TV series focusing on a man being hunted by a sinister organisation after witnessing a murder.

"So, in Japan there's a common [genre] called the tokusatsu genre, and one specifically is called V3, so I like that and so I used that V3. And there's another facet to this victory within the name and what that is is that with Danganronpa 1 and Danganronpa 2, they were very successful titles, you could say that I achieved victory through them, and so because, of course, I wanted to succeed with Danganronpa V3 as well, we decided to add victory to kind of show what we were going for and aiming for with this game."

We came away from our conversation with Kodaka feeling very intrigued about what he had told us, especially the big response to the game from fans in Japan, and so we're looking forward to September 29 when we can get our hands on the game for PS4 and PS Vita. Until then, however, we'll have to revisit Monokuma's horrors in previous games and try to prepare our minds for the trials that await.

"It's a Danganronpa game worthy of the name, and it should keep you hooked for the many hours it takes to explore."

Danganronpa fanatic Sam is here to take you through the first two hours.

A pianist, an inventor, a supreme leader and a... we just don't know.

Not all students are human in Danganronpa V3: Killing Harmony

A new batch of subjects have been unveiled, and one of them is a robot.

Danganronpa V3: Killing Harmony gets demo and a new trailer

The release is only a month away. 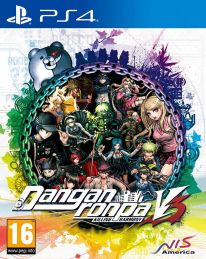