In the early days of the Internet, we spent unhealthy amounts of time digging into anything manga and anime related online. We even studied Japanese to be able to read all the many wonderful adventures, particularly the ones found in Shonen Jump.

Now Jump Force is finally here, and it's difficult to grasp that it's really happening. Because even if most of the characters included are only known to those who really love manga, it can be compared to a game containing He-man, Transformers, Spider-Man, G.I. Joe, Batman, Spawn, Ninja Turtles, Robotech and Predator. And many more. It's simply a game that shouldn't exist, but somehow magically got pushed through endless of lawyers and negotiations - and now offers what's possibly the most colourful ensemble in a fighting game ever.

And thanks to that we can now deliver Naruto's devastating Rasengan right between the eyes of Monkey D. Luffy, make raging air-juggles as Himura Kenshin and send Son Goku flying with a yummy Detroit Smash delivered by Izuku "Deku" Midoriya himself. The level of fan service here is utterly ridiculous, and since the fighters don't really belong together, Bandai Namco has given the game a curious unique design to get all the characters to fit into the same game and universe.

Thus, the characters look semi-realistic, even though they are still manga fighters and it gives the game a very striking appearance that we really enjoyed. And the design matters. In fact, the first thing you do in the game is create your own fighter. You choose between various typical manga hairstyles, add things like colour to the eyes and any scars/tattoos, as well as cosmetic details like dots on the forehead or dashes on the cheeks that make the character look like it's been taken from any popular manga. You even adjust your character's attacks and abilities as you level up.

As in all fighting games, and especially Japanese ones, there is, of course, a story. Explaining why all these characters that do not belong together now have to fight with, and against, each other requires a good deal of imagination. The basic premise here is that the comic worlds have started to merge with our own and Dragon Ball villain Frieza seems to be the reason. The solution is to start the elite squad Jump Force to free Earth from the manga invasion, and you'll have to play the key role in this yourself.

For the most part, you will run around in a pretty big hub world (which unfortunately also works as very slow and tedious menus) and perform tasks, equip your unlocked abilities and buy new stuff. For us, the fighting genre is rarely something we want to play on our own because, in the end, it is always about playing X number of matches against computer-controlled opponents with little variation. The problem is that fighting games are all about that human component and tension. Those seconds when you just look at your opponent and try to figure out what the rascal is going to do next, that's the main reason we love these type of games. And none of this translates well against computer-controlled opponents where the notion of "mind games" is completely lost.

Therefore, we did as we always do when reviewing fighting games - play them as they are meant to be enjoyed. And that means inviting good friends over to battle test the game. The fights are played in teams, three against three, where you choose your ensemble. Unlike games like Marvel vs Capcom, the health bar is shared between your characters. Tagging between them during the match is therefore about overwhelming the opponent and about making tag-team attacks with two characters, rather than getting a new fighter with full health as you're about to get knocked out.

The battles themselves are lightning fast. Since we didn't have the patience to go through the tutorial section as we started playing, we started a match in hopes of throwing Kamehameha all around, but instead, it ended with us playing the part of a punching bag rather than a manga hero. The difficulty level is unexpectedly high and even in the easier difficulty levels we had to stay focused, and that's with decades worth of experience with similar games.

At first glance, it seems to lack precision and is simply down to mashing buttons. You're even encouraged to do combos by hammering on one and the same button. But after some training, the basics start to feel natural and fortunately, the more we played, the more we realised what hides beneath the surface.

Despite the high speed, the characters are constantly focused on each other, and so there is no risk that you go and deliver jump kicks in thin air, which is otherwise common. This allows you to focus on trying to pinpoint your opponent's openings and quickly dash forward to try to start a combo at the right moment. And if your opponent does something rash, you need to react lightning quick with some absolutely insane super attacks such as Gaara's sand torture Sabaku Sôtaisô Fûiin, which takes over the entire screen in a way that is so epic that really nothing else in the fighting genre compares to it. Think GF summons in Final Fantasy VII-IX and you'll get the picture.

In addition, there are quite sophisticated systems for defence with both counters and dash movements. This means that you always need to pay attention to your opponent, who can surprise you completely by tagging out Jotaro Kujo (JoJo's Bizarre Adventure) and replace him with Kenshiro (Fist of the North Star) who pops up on your side without warning and starts fist-blasting your kidneys.

The more than 40-character deep roster (which will grow with at least nine DLC characters) is pleasingly very varied with a good mix of fighters for more advanced players and those who are more straightforward. Son Goku himself is, for example, a no-nonsense kind of character with rock hard kicks and fists with some powerful super attacks, this while Boruto requires constant movement and Yusuke is supposed to be a fighter who mainly appeals to more advanced players. We also want to mention the self-proclaimed ladies man Sanji from One Piece who is incredibly versatile - but who can't fight female fighters because he refuses to hurt them. Something that often leads to mildly bizarre matches.

We were most looking forward to getting to play as icons like Kakashi from Naruto and Shishio from Rurouni Kenshin, but it turned out to be another hero that really caught our attention. Our favourite turned out to be the City Hunter protagonist Ryo Saeba who brings with him an arsenal that would make The Punisher feel outgunned and vulnerable. It gives him a good range while being fast and strong, and it wouldn't surprise us if he is one of the first characters who will receive a downgrade when the first balancing patch comes around.

Fighting games with free movement often tend to be very imprecise and are usually not our favourites. Of course, there are small traces of this here too, especially before you get accustomed to the pace and game system. Yet it works very well despite the huge range of over 40 characters and the fan service here is something only Super Smash Bros. Ultimate can match. Certainly, the loading times are bad, the menus are overly complicated and single-player isn't better than the genre standard - but overall, it doesn't change the fact that this is a magnificent manga fighting game that is something of a dream come true for a longtime manga fan. As such it is sure to entertain us royally for a long time.

Spike Chunsoft's Jump Force releases for Nintendo's hybrid console in Japan in August of this year.

Jump Force is releasing for Nintendo Switch later this year 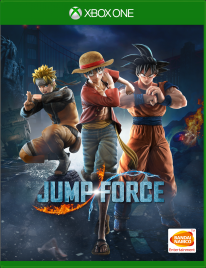