A short while ago we had the pleasure of trying and subsequently reviewing the then highly anticipated next chapter in the Dragon Ball franchise. A game that featured a stunning and unique visual style and that truly showed how an anime series could come to life in a video game. The success and influence of Dragon Ball FighterZ can be felt all the way to the core of Namco Bandai's newest fighting game, Jump Force. Inspired by the legacy of the Japanese based magazine Jump and its defining role in being the showcase for many Manga franchises which have since become classics. Jump Force is a homage to the many years Jump has been home to series such as Naruto, Dragon Ball, One Piece and several others.

The basic premise is an all-stars brawl between the biggest of the biggest Japanese manga heroes. Yet, despite being based on an array of manga heroes, Jump Force goes aesthetically in the completely opposite direction. The developer has ditched the iconic comic-esque artistic style which made these properties famous and instead is going for a photorealistic visual finish. A bold and dangerous choice to be sure.

Namco Bandai explained the move towards a more photorealistic approach as a consequence of the game's narrative. Supposedly, Jump Force takes place on our own version of Earth and serves as a battleground between the good and dark powers of the Jump characters. Watching Naruto square off against Goku in an entirely different style than their own can at first be weird or even strange but watching on it grew on us with each passing minute. The overarching conflict of good versus bad clashing on Earth is likewise reflected in the level design. The demo let us try a total of two levels, both of which had been made available to properly showcase this alternative new art direction. We could manually choose between either the Toblerone chocolate inspired mountain of Matterhorn Switzerland or New York City on the brink of destruction. Both levels were great examples that showcased the graphical fidelity as well as the creative scope pf the game.

The environment furthermore plays a visual role in the many battles, and Dragon Ball's Frieza is a great example of exactly how this comes into play. During a match in New York, the player can unleash special abilities utilising parts of the city skyscrapers to utterly annihilate an enemy. Likewise, using Goku's earth-shattering attacks can briefly change the landscape of Matterhorn. Just as with Dragon Ball FighterZ, fighting your enemies in Jump Force is a spectacle to behold. No matter whether they're cunning attacks by Naruto or powerful blows by One Piece character Luffy, you can't help but feel like an absolute badass when you tear the world in half trying to destroy your opponent. Notably, the included Dragon Ball characters are amazing to watch in action.

In the early build at Namco Bandai's E3 booth, a total of six characters were available and each match put teams three-strong against each other. During a battle the player can quickly and effectively shuffle between heroes and perform devastating team attacks with just one button. Each character also has a number of special attacks, which can be triggered using the RT button and are all personalised for the individual character and formatted for the game world. The game can at first glance come off as very plain and too simple for the more serious gamer, something the demo Bandai Namco showcased didn't do much to remedy. Bashing a single button often proved the greatest road to success - much to our disappointment. The developers, however, assured this wouldn't be an issue in the final version and it was simply made easy so that everyone at E3 would be able to play the game. Let's hope this is true.

Crossover fighting games are fairly commonplace these days. Street Fighter X Tekken, Super Smash Bros. and Marvel vs. Capcom immediately spring to mind, but there's more. If done correctly, however, Jump Force could truly stand out from the growing crowd due to its bold setting and promising gameplay elements. We have high hopes for this one.

Spike Chunsoft's Jump Force releases for Nintendo's hybrid console in Japan in August of this year.

Jump Force is releasing for Nintendo Switch later this year 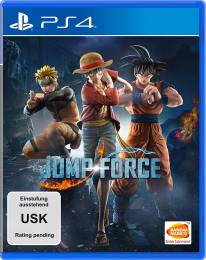