There's tough competition when it comes to on-screen representations of The Joker. Heath Ledger holds the crown for many, but fans have also enjoyed Cesar Romero and Jack Nicholson in the role, and that's without mentioning the villain in games too. With Jared Leto's version of the Joker in Suicide Squad falling flat with a lot of the audience, though, there's room for another alternate version of the character, one that we've got this month with the release of Todd Phillips' Joker.

Phillips' film has been the talk of the town ever since it was first revealed, and that's because of the memeification, if you will, of the Joker character. Online communities have taken the villain and turned him from a symbol of evil and chaos into a cringe-worthy figure representing gamers and, in certain cases, the group known as 'incels'. We've all seen the 'we live in a society' memes after all.

Is this a tale for the incels, as many might have feared? Is this a tale that justifies violence if one doesn't get what they feel entitled to, be it love, money, or power? The short answer is no.

There's a lot more depth here than just 'sad guy feels the world owes him something, and then goes crazy'. To describe this film in such terms would do the two-hour experience a disservice, as Phillips' tale shows the gradual unraveling of a man who is constantly beaten down by the world around him, but is still unjustifiably evil in many ways.

This version of the Joker, expertly portrayed by Joaquin Phoenix, is given a lot more time to breathe with his own film, and there's not a bat in sight to fight him. He's not a criminal mastermind either, as this is the tale of the Joker as a person, as Arthur Fleck, rather than Joker the villain. How did he become the twisted figure we've seen so often? This is what is trying to be told here.

The most interesting part about the film is that Phoenix's Arthur Fleck isn't always the bad guy. He is in many ways a victim of the harsh environment around him, and as Phoenix himself has declared, the interpretations are far from black and white. You sympathise with him a lot, and in a sense it's a very tragic tale, which makes Phillips' story all the more disturbing, since you find yourself allying with a character that is very problematic in his actions.

It's an intense film, without a doubt. Fleck's position isn't exactly rosy at the film's opening, but the atmosphere is thick and heavy as things slowly start to unravel, and as a consequence, we're never sure where things are going or how dark the film will get. It's a constant edge-of-your-seat experience, and not because it's action-packed either, but purely from the fact that you can never escape the tension in the air.

The excellent soundtrack helps usher this along nicely, and it's just as distorted and quiet as Phoenix's performance. It reminds us a bit of the music in Foxcatcher in a sense, as that's another film that uses a sombre soundtrack sparingly in order to convey the madness that we're seeing, and keep a lump in our throats at all times.

It should come as no surprise that Phoenix himself dazzles in the role as well. From the offset he shows that Arthur Fleck is troubled, and his gradual change in the role in subtle enough to make you feel like this is truly a genuinely disturbed individual. The maniacal laughter is the standout feature of the character, but again, you feel sympathy rather than fear towards Fleck a lot of the time, as he's just a man struggling with life and trying to make people laugh in a cruel world.

There are supporting characters like Robert De Niro, but really Phoenix is the only person you'll need to be watching. He captivates and makes the role his own, exactly as Ledger did over a decade ago. This is a Joker that you can say is "Phoenix's Joker", and that goes to show how much of a stamp he put on this version of the character.

Violence is another incredibly important part of the film, specifically because you never know when it's coming. Phillips knows that you're walking into this film and expecting something bad, but he keeps you guessing and waiting for the moment, diverting attention in some really suspenseful scenes.

Speaking of suspense, this has an incredibly spectacular climax that Phoenix executes perfectly, rounding off the film in a sick little bow that is really befitting of the journey we'd been on up until that point.

The one sticking point with this is that we hope certain individuals don't take this as a rallying cry for violence against society. Sure, Phoenix's Joker is a victim, but he's also inexcusably wrong in many of his actions, and that should not be up for interpretation. Taken as a work of art though, Phillips' has astounded and stunned with this version of DC's iconic character, reinventing the Joker once more in perhaps the most twisted way yet.

"Phillips' has astounded and stunned with this version of DC's iconic character, reinventing the Joker once more in perhaps the most twisted way yet." 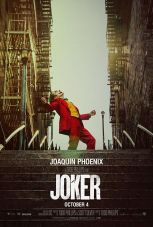