John Wick has, as a franchise, reached it's third chapter and while one might think that the third installation in an action series may be predictable, John Wick: Chapter 3 - The Parabellum is surprisingly not predictable at all. The movie is just as efficiently and carefully constructed narratively as fans have come to expect from the series and continues to build upon the well-constructed, interesting universe as well as its fast-paced action.

The movie begins just a few seconds after the second chapter's ending. Wick has violated the very explicit rules that apply to assassins worldwide and is now "excommunicado", meaning he's now fair game for all the cold-blooded professional killers around the world (and New York is, of course, the headquarters of these professionals). Wick can't trust any of the acquaintances he has made during his years as an assassin and his desperate quest to wipe his sure death sentence leads him from New York to Casablanca and then back again.

In terms of tempo, it's a smooth, one-gear ride all the way through and just like with the two previous chapters as well as in movies like Mad Max: Fury Road, the action revs up in minutes - if you're not ready, the bus leaves without you. Parabellum has pure adrenaline pumping through its veins from start to finish with only short pauses between the long and frightening action scenes. This is the identity of the John Wick franchise and Parabellum fully embraces this while saying "no thanks" to introducing concepts such as love, motivation or basic plot structure. The only thing on our minds when watching the movie was the "John Wick won't die" and "John Wick will kill many to avoid death" quotes from within.

With senseless, brutal action and a lack of plot structure, how does John Wick differ from an underwhelming Steven Seagal action flick from the '90s? Well, for one, the aforementioned self-awareness elevates the John Wick movies significantly. Dialogue and general manuscript execution are put into play in a tongue-in-cheek way and you get constant hints that break the fourth wall somewhat, simply by letting you know that the moviemakers knew that the ideas were a bit over the top. It's this self-awareness that has the audience accept the premise and this is still true even in the third instalment in the series, no matter how many people Wick relentlessly executes.

And then there are the action sequences, the core of John Wick. Keanu Reeves, various martial arts experts and stuntmen have been working hard, once again, to create a well-choreographed dance with death, and although the third chapter doesn't bring any new elements into this choreography, it's just as entertaining to witness Reeves in the thick of it once again. We also have to add that the attention to detail put into this movie is remarkable.

Parabellum builds on the surprisingly exciting lore that exists in this assassin-led world through the addition of more rules, parameters and laws that keep the universe from spiralling into pure chaos. The series has introduced The High Table which has people tasked with making decisions, there are Markers, there are adjudicators who can deconsecrate or reconsecrate, there are trials, penalties and ways to appeal or overturn sentences. It's all crammed into the narrative and even though it appears decisively weak in spirit at times, one can't help but follow it all with great interest when the exposition is presented to the viewer.

However, Parabellum isn't a joy all the way through. This is especially the case during the film's second act, via the introduction of Halle Berry's character, Sofia. This act mostly takes place in Casablanca and its surrounding areas and feels rather lacking compared to the New York sequences. Sofia's introduction also feels rather bland and while the other characters such as Winston, The Director and even the villain Zero all play a significant role in the big picture, Sofia just kind of disappears abruptly. The Casablanca setting just doesn't feel as right as Wick moving through the rainy New York streets.

The music also feels uninspired. Composer Tyler Bates has tried to use a fast, hard action pace but the techno music that blares ends up being hopelessly bland. If the music would have got a break countering this, such as an action scene or two with classical music playing, we would have been more satisfied.

This criticism doesn't mean that John Wick: Chapter 3 - Parabellum isn't a great piece of entertainment, however, because it most certainly is. Even though we live in a world full of sequels and films becoming franchises, we have nothing against a fourth chapter being shot in the future.

MOVIE REVIEW. Written by Magnus Groth-Andersen on the 28th of June 2019 at 16

John Wick is back for the third time in John Wick 3: Chapter 3 - Parabellum and the franchise hasn't lost its spark just yet. 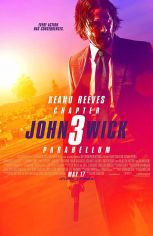