Bizarre Creations are best known for their extremely decent racing games. Say this in front of them and they'll interrupt you to point out that they also made The Club in 2008, which, they'll continue, was a third-person shooter and not a driving game. At this point they'll cross their arms and look a little bit upset. They've got pedigree, to be sure. Project Gotham Racing is regarded as one of the finest series of games ever to grace our screens, and more recently their departure into more arcade style racing brought them some success with Blur. And yes, The Club was a well-regarded and original shooter with some interesting arcade mechanics.

The talent behind Blood Stone is evident then, which until now has been the primary reason for the interest in this schizophrenic, half-driving, half-shooting Bond title. The latest film is nowhere to be seen, with MGM allegedly having spent its remaining budget on scratchcards, and so Blood Stone stands alone as an original bit of Bond fiction, penned by James Bond film writer Bruce Fierstein no less. The faces and vocal chords of Dame Judy and Danny Craig are in attendance, Craig's official stunt double Ben Cook has provided all the motion-captured animations, and Joss Stone (whose single "You Had Me" rocketed to ninth place in the UK singles charts in 2004) stars as the Bond girl. She even wrote the theme tune and sang the theme tune. It's sort of an all-star cast.

But alas, Joss Stone couldn't make it to the hands-on presentation of Blood Stone, so it was in a room full of noisy German men that I had the chance to sit down with one of the game's driving sections. It doesn't defy expectations - Blood Stone's driving segments are as polished as you could imagine, with weighty Bond cars power-sliding around bends, narrowly avoiding debris and jumping over bridges with gay abandon. In this particular mission I'm keeping up with a train as it speeds a villain away from our protagonist, at first the route takes Bond through a dense industrial area - I'm tasked with avoiding tankers as they spin out of control, threading the narrowing gaps between speeding trucks at ridiculous miles per hour and skidding through explosions in an overly dramatic fashion.

It's as scripted as any James Bond car chase, playing out like a madcap stunt run on a film set. Muck it up and you fail almost immediately, resetting to the last checkpoint. There's a degree of trial and error involved here too, as navigating the hectic route to the finish line requires considerable concentration. The chase soon leaves the tarmac, arriving at a snaking frozen river running beneath the train track. There are, naturally, fewer vehicles to avoid down here, instead you're dodging holes in the ice and the concrete supports holding up the track. The handling is affected by all this frozen water too, with less grip I find myself spinning out more often, before figuring out just how light a touch is required.

So the driving bits are great, to absolutely nobody's surprise. They have the potential to frustrate, given that punishing insta-fail mechanic, but the driving itself is as solid as it is bombastic. The third person shooting, which we're told will form the larger part of the game, looks to be an interesting mix of stealth and combat. We're taken through a mission on a construction site (no, really, come back) using two approaches: the sneaky "I'm actually a spy, remember?" method, and the balls-out "oh hold on, I'm Daniel Craig, remember?" method. The former incorporates silenced pistols and muffled neck snapping. The latter incorporates machine guns and excitement.

Oddly, it's the action approach that holds the most appeal. Bond, wonderfully animated and mo-capped out the wazoo, seems to flow through the level like a neck-snapping ghost. Running and jumping blends seamlessly into any one of the hundreds of uniquely animated, context-aware takedowns. Bond smashes heads into masonry, breaks legs, cracks jaws and generally pulverises the goons he encounters. Takedowns fill your Focus Aim meter, a Splinter Cell: Conviction style "kill everything" button that triggers a stylish, automated headshot on a chosen enemy. The stealth approach, by comparison, looks rather dull.

What makes this all the more haunting is the wonky Daniel Craig likeness. Yet again his face has defied digitisation - Blood Stone's Bond resembles an glassy eyed sock puppet wrapped in cheap beef. Still, that's one of the few complaints we can level against Bizarre's game - if they can couple their driving and their shooting segments well, and make sure we're not spending too much time pottering about in construction sites and other locations lifted from the Dummy's Guide to Third Person Shooter Levels, then Blood Stone looks like it could be an explosive and cinematic title worthy of filling that ever-widening gap between films. 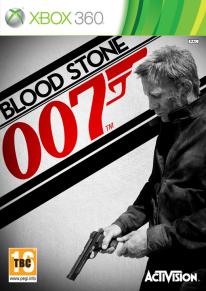