Activision have announced the next James Bond game. Titled James Bond 007: Blood Stone, the game isn't based on any previous movie and the story has been written by "legendary screenwriter" Bruce Feirstein.

Perhaps the most surprising piece of news is that it will star singer Joss Stone (pictured) as the new "Bond girl", and Stone will also record an exclusive track featured in the game. "I'll Take it All" has been written and performed by Stone and Eurythmic's Dave Stewart. Daniel Craig will lend his likeness and voice to Bond.

On the development side of things, Blur and Project Gotham Racing creators, Bizarre Creations are handling development on their first Bond title to date.

Here is a short description of what the game will offer courtesy of the press release:

"Players can engage in cover-based firefights, lethal hand-to-hand combat and speed their way through explosive adrenaline-fueled driving sequences as they embark on a global chase leading to action on land and sea through Athens, Istanbul, Monaco and Bangkok. Gamers can also feel what it is like to be a 00 agent, as they take the battle online in several robust 16-person multi-player modes that require skill, teamwork and strategy as players compete in matches that will have spies battling mercenaries." 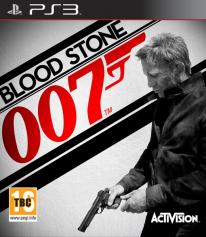