If you've ever seen the cover for Ivy the Kiwi?, you've probably not missed the big sticker that says that the man behind the game previously worked on Sonic. That's not as obvious when you start the actual game, since Ivy is not cool nor fast, and doesn't live in a colorful world. Instead it's a small bird that still carries a part of its egg on its head and lives in a world filled with brown colors.

Perhaps it's because Ivy isn't very old that the only thing it has learned is to run forward until it meets a wall, which will make it turn around and run in the opposite direction unless you tell it anything else. Depending on if you play on a a Nintendo Wii or DS, you either use the Wiimote or the stylus to draw vines that Ivy can climb on, and with the help of these you can guide the bird forward.

You can draw up to three vines at once, and if you try to draw any more the first one will disappear. That wouldn't have been much of a problem, but for some reason Ivy has decided to go on an adventure that contains 100 labyrinthine levels, all filled with dead ends and deadly holes that the small bird can topple into.

Every level comes with a time limit, and contains ten feathers that rewards you with extra lives and points if they are collected, which add to the challenge. The feathers are of course located in the more dangerous parts of the levels, but of course it's hard to resist the urge to do everything you can to get them. In all, the idea behind the game is as simple as it sounds, and if you've played games like Kirby Power Paintbrush you probably have a pretty good idea about how the whole thing works.

There are a couple of techniques you'll need to learn though. The vines can only be drawn in straight lines, but they can be moved afterwards. That way you can let Ivy run down a vine and then toss it across the screen by moving the vine. You can also pull out vines like rubber bands and make Ivy fly forward - a technique used to break through stone or defeat enemies.

Once you've got the different methods down, Ivy the Kiwi? can be a pretty fun experience. But the game tends to trip over itself. The controls on the Wii lacks precision, and at times it really hard to save the bird by waving the Wiimote around. The DS version is more precise, but on the other hand it lacks the Wii version's more clever way to pick the correct the vine in the first place.

No matter which version of the game you choose, the biggest drawback is that there really isn't a single element that makes Ivy the Kiwi? feel like a game you could have bought from the digital Wii or DS stores. Even in its most entertaining moments there's no escaping that the game has extremely simple graphics, and you've seen most of what it has to offer fairly quickly.

Ivy the Kiwi? might be fun in small doses, but it just doesn't offer up anything we haven't seen before. There are simply no surprises to be found here.

Gamereactor UK
+
Accessible, fun idea, good level design
-
Way too simple, we've seen it before, unprecise controls, could have been a downloadable title
is our network score. What's yours? The network score is the average of every country's score

REVIEW. Written by Thomas Blichfeldt (Gamereactor Denmark) on the 11th of November 2010 at 16

Yuji Naka, the co-creator of Sonic the Hedgehog, returns in Ivy the Kiwi? for Wii and Nintendo DS. 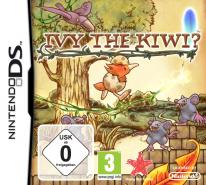