Persona Central has spent the last few days going through an extensive interview from Dengeki Playstation magazine, revealing some exciting details about the development of Persona 5 Scramble: The Phantom Strikers (the Japanese magazine is not yet available, so we have to cite them). According to this report, the Atlus team started discussions with the developers at Omega Force in late 2016, only a few weeks after the Japanese release of Persona 5. Both studios initially had their own ideas for the collaboration, but ultimately the Persona team worked out the story themselves.

Still, the process took Atlus two years from concept to completion of the story, while the total production time was about 3.5 years. Persona Central writes that the cheerful moments in Persona 5 were well received by the fans and the team, therefore, decided to capture the relaxed atmosphere of the group in various in-game events. Persona 5 Scramble: The Phantom Strikers will start half a year after the events of Persona 5 and continue from there.

In a new "Travel Report from Morgana" (a kind of developer diary from Atlus), many more details about the upcoming Musou spin-off were presented, too. In addition to further locations and information on various NPCs, a previously unknown, playable member of the Phantom Thieves was revealed: Zenkichi Hasegawa, code name Wolf. His persona has powerful almighty attacks, which certainly makes him a strong ally.

In Japan, the title will release in a few weeks, while European players have to wait for the concrete localisation plans to reveal themselves.

Atlus just recently announced that the final trailer for the upcoming Persona 5 spin-off will land tomorrow.

Atlus and Omega Force revealed that they spent two years to creating the story for Persona 5 Scramble: The Phantom Strikers and announced further reinforcements to the Phantom Thieves.

Persona 5 Scramble: The Phantom Strikers producer Daisuke Kanada gave some information regarding the game in a recent live stream.

Check out more of the action-focused Persona game from Omega Force.

We get to see where the story will take us in this RPG, landing next year in Japan for PS4 and Switch. 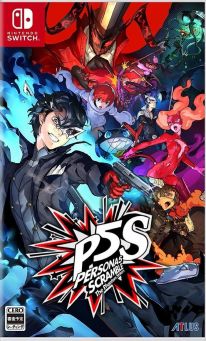