We've heard many times before that certain games have been designed with co-op in mind. Most often, this means helping each other reach higher ledges, or having one player shoot whilst another is driving a car. However, Game Director Josef Fares and his studio Hazelight have thought much further than that, and I dare say that It Takes Two is simply a golden standard for what co-op games can be.

As the game begins, we are introduced to the two parents: Cody and May, whose love has unfortunately faded, leading to petty squabbles about the most unnecessary things. And it is always extra difficult when there are children involved, because they tend to get caught in the middle. This makes Cody and May's daughter cry in the family's outhouse, wishing they would stop fighting and make up instead. Following this, the two parents magically turn into small dolls in a fantastical version of the real world, where toys have been brought to life and animals have become intelligent.

A book and character (the book and character is actually one person) called Dr. Hakim is the only one who seems to know what is really going on and acts as some kind of glue for the story, which is essentially a reasonably well-written sitcom. The two parents have to deal with mistakes they have made in the past and are forced to help each other to try to get from the outhouse to the home to contact their daughter.

If this journey, which takes place within a normal house, had been easy, it would not have been much of a game. But as you can imagine, it turns out that things are very difficult for those who are just the size of a normal thumb. It Takes Two is really designed with entertainment in mind and if you're looking for realism, you're best looking elsewhere. This essentially means that during the adventure you will get to do things like experience river rafting, explore space and help terrorist squirrels at or around a normal family's house.

I'm deliberately vague to let you discover everything for yourself, but the fact that the whole adventure takes place on a paltry villa plot in no way means that it's lacking variety neither in terms of environment nor gameplay. Even so, it is first and foremost the aspects of the co-op that make this game so magnificent.

If you have played Hazelight's last game A Way Out, you will to some extent recognise the setup and gameplay. Almost all adventure is displayed split-screen, whether you play locally or online. You need to be able to see what your fellow player is doing to function optimally yourself. But this is throughout way more advanced than their previous title.

Challenges include puzzles, action, platforming, memory tests, coordination exercises, boss fights and much, much more. During the course of the game, I was really surprised by the enormous creativity displayed when it comes to the challenges that two people have to solve by collaborating and communicating. There is no single player, and it's pretty much impossible if you are your gameplay partner don't communicate with each other.

In some cases, it's just easier things like shooting each other out of a cannon where one shoots and one aims, or vehicles where one should turn and the other adjust the speed. We've seen that before, but in most other cases, it's brilliant stuff that I've simply not seen in games before and it brings to mind the kind of crazy ideas Nintendo usually offer. In addition, during the level you sometimes get access to tools or gadgets that further help to shake up playability, and at no point does it feel like It Takes Two is stagnating or stops surprising.

In addition, there are also mini-games throughout where you get the chance to play against each other. The setup is often simple and intuitive, but deep enough to entertain anyway. For example, there is a tank mini-game, horse racing and precision throwing to name a few of them. These mini-games can also be accessed from the game's menu if you want to play some without starting the main adventure.

Not everything is peace and joy, though, as there are a couple of flaws present. The biggest problem comes from the controls. When there is so much you can do, it is of course difficult to get everything to work perfectly. The controls aren't quite as responsive as I would have liked and I think the developers themselves know this. This has been solved by a low level of difficulty where you can always come back as long as the other player is alive as well as extremely generous check points, even during boss fights.

Boss fights are often the highlights of games, but in It Takes Two I often think they are among the worst elements. On one hand, the game switches things up and becomes more action-focused, which doesn't sit well with the sloppy controls, and on the other hand, it is not always obvious what to do to hurt the boss. Having to find solutions without unnecessary help is actually one of the highlights of the game, but during the boss fights I die if I miss and thus the solution becomes 'trial and error' focused.

Still, despite these flaws, It Takes Two is still undoubtedly a well-crafted game. In addition to offering co-op that far outperforms everything I've seen before, the voice acting is also good, the music well-written and the graphics very fancy. The story probably won't earn any literature prizes, but the romcom-like setup works well and Cody and May's journey is still something you'll want to see the end of.

All in all, It Takes Two earns itself a high and very well-deserved rating. Feel free to play through this with someone you like, whether it's a good friend or a partner. The collaboration means that your friendship will be tested, but also potentially enhanced when problems are solved together. Thanks to the fact that you can share the game with another person online, there should be no difficulties with finding someone to play with. Be sure to do that, because with It Takes Two, a new standard for co-op in games has been set, by which all other similar titles will be judged for quite some time.

Gamereactor UK
+
It's co-op gameplay remains fresh and exciting. It's take on the rom-com genre is an engaging one. The voice acting is good and the music is well-written.
-
The controls aren't as tight as they could be. Boss require a lot of trial and error.
is our network score. What's yours? The network score is the average of every country's score

It Takes Two is now officially a million seller

The co-op driven game has only been out one month.

It Takes Two is getting an hour-long demo at launch

The co-op only game is still set for March 26. 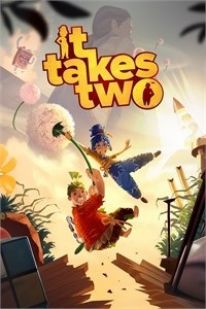