The Total War series has always been known for its huge sweeping campaigns that can span generations and involve whole continents. The Saga spin-off series, which started with Thrones of Britannia, looks to narrow the focus of the series somewhat. Specifically, ToB whisked players off to 9th century Britain, during a volatile period of history when a number of small countries unified to become what we now know as England.

This narrower focus looks set to continue with what looks like a new Total War Saga game in the works, and according to a trademark filing spotted and then shared over on Reddit, the next game in the series is going to be based in Troy.

Sega and Creative Assembly have yet to confirm whether or not this is the next game in the Saga series, although the trademark does suggest that's the case. If it is, then we can at least look forward to an exploration of one of the most storied periods of ancient history, with the infamous Siege of Troy (complete with Achille's and his heel, and the giant horse - we can't wait to see what the devs do with that) and a number of other notable battles with neighbouring city-states for aspiring generals to get their teeth stuck into.

At this stage, all we can do is speculate, but with Gamescom just around the corner, we're expecting clarity to emerge from the fog of war. Stay tuned.

Those who claimed the title for free on launch day will also receive the Mac version at no extra cost.

The physical edition has a metal case and includes the Amazon DLC.

Update: technical hiccups have caused a change of plan, so instead of Total War we're diving into Fall Guys.

You can claim Total War Saga: Troy for free on Epic right now

It's out today on PC and, for a limited time only, the new strategy game from Sega and CA is free.

The DLC expansion will also be available for free on the Epic Games Store, but only for a limited period of time. 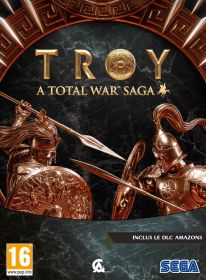