Square Enix might have something up its sleeve for Kingdom Hearts fans before the release of the highly anticipated Kingdom Hearts III. Fansite KH13 reports that a former Square Enix employee has revealed a game called Kingdom Hearts 2.9 on his CV on LinkedIn. He claims to have worked on a project called Kingdom Hearts 2.9 for 10 months, and among his responsibilities were game and boss planning and balancing. He also lists the platforms, and the game seems to be in development for PS4 and PS3. This sort of information can be faked, but it seems unlikely (though it cannot be ruled out).

Square Enix hasn't said a word about this game before, so for now you should take the news with a grain of salt. But maybe the Japanese company has a surprise for us at Tokyo Game Show? The only question that remains is what they would add to Kingdom Hearts 2.5 to make it 2.9 - a new exclusive prologue for Kingdom Hearts III perhaps?

"Ultimately, Final Chapter Prologue is a fine example of the series excellence and level of quality that stretches even beyond its major instalments."

Kingdom Hearts HD 2.8 coming to Xbox One this month

Watch a three hour lecture about the plot of Kingdom Hearts

Kingdom Hearts themed Playstation 4 to be released in Japan

The Tokyo Game Show gave us a better look at the game. 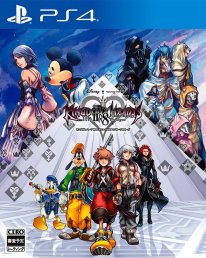