"Lightning is the perfect avatar for a global, heroic woman and for a world where social networks and communications are now seamlessly woven into our life," Ghesquière rationalised.

"She is also the symbol of new pictorial processes. How can you create an image that goes beyond the classic principles of photography and design? Lightning heralds a new era of expression."

Lightning's out-of-hours job heralding a new era of expression on the digital catwalk included her taking part in an interview. An actual real interview, with real questions, and, you know, real answers. The full text is available on The Telegraph, so if you want to make sure we're not taking Lightning out of context, you should definitely head over there.

With regards to Ghesquière's collection, Lightning said: "Though his style was new to me, the moment I laid eyes on his collection, it was as if I was hit by a bolt of lightning. I knew that with this, people could change. I could change.... He changed the way I see myself. Perhaps I'm finally learning who I truly am."

Does the Final Fantasy star like being an ambassador for the company? Of course she does!

"It is a thrill that I, who has faced my share of danger, have never experienced before. LV is a new adventure―a new fantasy―that I will enjoy from the bottom of my heart."

At the end of the "interview" might there even be a hint as to the return of the character? Here's what was written:

"One day, not so far in the future, I will be out there again, in a world of strife. But I won't be the same person I was before. I will return to my origins, like a Mobius strip, but it'll be a new me, one who has evolved."

Might that mean a return for Lightning? With Final Fantasy VII: Remake (did you spot the Cloud Strife reference?) set to follow Final Fantasy XV and mobile title Mobius Final Fantasy in the months (and years) ahead, there's now plenty of speculation that she might well make another appearance at some point in the future. 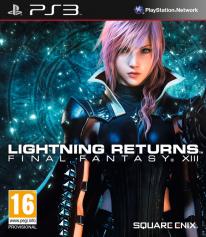