FIFA 10 was a refreshing panacea in a series that had started to run stale, introducing a newfound focus and determination to keep EA at the forefront of a genre that was rapidly becoming the domain of Pro Evolution Soccer. But can the latest in the series maintain this momentum? Gamereactor's Lorenzo Mosna corners FIFA 11's senior producer David Rutter in the dressing room to find out what's next for the long-running series...

So here we are again, new year, new game. How difficult is to come out every single year with an improved game?

I'd be lying if I didn't say it's hard. It's hard. A lot. But we've our team, big football fans, big fans of video games... personally I've been making football games for the past 15 years. When I watch football on telly I always see something I'd like to be in the game: our team does the exact same thing I do. We're fans of what we do, we're enthusiasts and basically every day, when we go to work, we have a precise idea of what to do: we've got a great game, we're refining it, we're getting response feedback from our fans and we've got some very cool ideas. We're doing what I think people want us to do.

So the first improvement you're including is called Pro Pass, what is Pro Pass exactly?

When we talked to the fans of the game of the last year, way before FIFA 10 was finished, a lot of people were frustrated by the passing system in previous FIFAs: they called it "ping pong passing" - the ability to just tap a button very quickly and "ping pong the ball around the pitch". It's not very realistic, it's not a great way to play the game. So we've made the decision to remove our passing system and replace it with a new form of passing called "Pro Passing". Essentially it's based on three things: firstly it uses your skill, your ability to time your pass well. If you time it too hard the player receiving the ball will control it with difficulties, if you time it too slow the opponent can intercept the ball. The second part of it is the difficulty of the pass the angle at you're trying to do it: the velocity of the incoming ball, how low on the ground it is effects the success of the pass. The last part is about the ability of the player that you're controlling. So basically an easy pass, with a good player that you timed perfectly will be a good pass, like a "ping pong pass", but a difficult pass with a bad timing it's likely to be error-prone.

Aren't you afraid of overcomplicating the controls?

No, we're not afraid and please write about it. This system is intuitive, rewarding and essentially it's based on the laws of human beings, the laws of physics, and players instantly recognize it. I doubt that anyone who is playing this game will ever feel frustrated. Anyway, if you don't feel comfortable with the configuration of the controls you can switch off the Pro Pass: the game can be made to be very easy, very accessible in the control scheme. Anyone I talked to thought this new feature makes the game hard. They all say it slightly slows the game down because you have to think about what you're doing before pushing the button, providing variety and depth to the passing.

Now let's talk about the "Personality +" system. What's that?

Personality + is a very important feature. It's massive. It takes a long time to explain, it takes a lot of videos to show, but I think the important part is when you'll get hands on the game you will see, you will feel, you will understand that each of the players in the game is very different. I'd say as in real life. We're also doing this in three ways: firstly is the way the players look, both from close up and from far away. We have tripled the body types this year. We want you to immediately recognize any player you know. The second part is the way they move, their animations on and off the ball, their celebrations, their facial animations. We've motion captured expressions and made eyes blink. The third and bigger part of Personality + is the attributes system we have in the game. The entire gameplay engine is now driven entirely by the attributes of the players. So if you have a skillful dribbler, he can make a very rapid 360 degrees dribbling. Attributes influence passing, shooting, heading, positioning, acceleration... every single thing you see in the game is now dependent upon the attributes.

How do you get the player data to make your database? It seems a complicated process...

It is. The database that we use is provided by a lot of people. We have 10 people in Vancouver who control 150 people around the world that provide data. Then we work with 1,700 people that review that, to make sure that nobody's making stuff up, making England better than they are... these kind of things. We have a reality check on it, and if people think we are wrong we have a huge forum community to discuss about it and we're eventually changing the data. Similarly if you're thinking we are completely wrong we have a new feature this year: we allow you to create your own version of existing players, future players that are now starting their career or past players that are now retired.

We've removed the previous Pro Season Mode and the Manager Mode, replacing them with a brand new game mode called Career Mode. It allows you to embark on a 15-season campaign with a player, a player-manager or a manager. It allows you to participate in the world of football in a variety of different modes.

Customization is also important. I heard you can create your own chants and make the crowd sing what you want...

The Custom Audio System it's a step forward: if you're a football fan I think it's pretty cool. We have a feature that allows you to assign music you have on your hard disk to the game but you can also apply sounds to the crowd. You can have chants for your team and for another team. Some people asked if we have vuvuzelas in the game. The answer is no, we don't have vuvuzelas in the game, anyway if you owe a vuvuzela you can sample it, put it in the game and assign it to your team.

Some days ago Peter Moore appeared on various websites, saying he's aware of Metacritic and its scores, because for a franchise like FIFA that repeats itself once a year it's difficult to pass a 90 percent score. Are you making games to please critics or gamers?

I think we're making it for the fans. We've talked to hundreds and hundreds of people that didn't like ping pong passing and wanted a pro passing system, the wanted some physics and we put that physics in the game, they wanted handballing, they wanted a better manager mode and we made the Career Mode, people thought that personality was more based on power and speed and so we've done Personality +. Many people in South America haven't got the license for their teams and so we're giving them the possibility to create their own teams in the Creation Centre. People haven't got the chants in the game and we created custom audio... I think that if you make a brilliant game, if you listen to the people who play it, it will get good reviews too.

REVIEW. Written by Christofer Olsson (Gamereactor Sweden) on the 29th of October 2010 at 16

It's that time of the year. FIFA time. The season is kicking off and Christofer has been kicking virtual balls all month long...

Because tired players are sad players

So you want go guard a goal, eh?

How does it look on Nintendo's console? 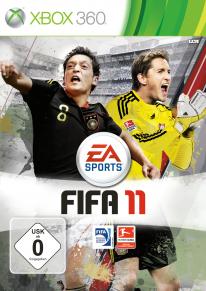