Between Flash and Catwoman? Between Wonderwoman and Green Lantern? Solomon Grundy and Harley Quinn? Mortal Kombat developer Netherrealm have set out to answer those questions, as well as numerous other matchups within the DC universe, and so a boatload of the publishers heroes and villains are going to duke it out in classic fighting style in the upcoming Injustice: Gods Among Us.

Unlike other superhero fighters, such as Marvel vs Capcom and Warners own Mortal Kombat vs DC Universe, no established fighting icons are thrown into the mix here. It's all about pure superhero beatdowns, and that influences the overall atmosphere.

Netherrealm are going for a cinematic look, the dev explains, as if you were watching a superhero movie. It's seen in everything from gameplay elements to the actual presentation - menus, for instance, are styled to look like those we know from blu-ray movies. Noone shouts "Round 1, fight!" at the beginning of each fight, and actually there are no rounds either. You get one shot to win the fight - luckily, you have two full health bars.

Injustice also challenges some of the common fighting conventions. The sets and backgrounds play an active role the fights. For instance, we see Superman and Nightwing rip into each other on the streets of Metropolis. Nightwing can jump and do flips off the cars in the background, while Superman can pick them up and throw them. Another fight takes place in the Batcave, where Flash and Cyborg are duking it out. Flash can grab onto a generator hanging from the ceiling and launch himself off it, whereas Cybog can tear it down and throw it. The wires exposed by this maneuver are live, setting up an electrocution trap for anyone unlucky enough to be kicked into them.

Cabinets are smashed and grenades come pouring out, with both combatants able to pick up and throw them. Every stage is divided into different levels that the fights can move through. For instance, Cyborg hurls Flash into an elevator, and keep punching him for a 12 hit combo as they are carried to another floor. Something similar happens in the Superman-Nightwing fight, where Supes throws the former Robin through a skyscraper (with every penetrated wall and floor counting as hits in the combo), and as he flies out the other side of the building, both of them land on a nearby roof and continue the fight.

Like other games in the genre, each fighter has a special bar with three stages that allows for powerful attacks. Fill up the two first parts, and you can execute an attack that involves a little bit of dialogue, with close-ups and all. A full bar lets you unleash a super-move that seemingly has no upper limit to their epicness in scale.

All of them are tailored to the individual style of each character, of course. Nightwing uses his motorcycle to string together a series of fast attacks from multiple directions. Flash runs halfway across the globe to build up power an momentum, with the camera cutting to a shot from outer space, showing his glowing trail moving over the Pacific. Superman throws an uppercut that sends his opponent flying into the stratosphere (again accompanied by an ultra, ultra, ultra-wide shot from space), chases after him and punches him back to earth.

These scenes, where the game pulls no punches, look like something straight out of the cinema. The developers want to emphasize that these are superheroes, not just dudes fighting.

As to the combat system, the devs say they are aiming for making the game accessible for everyone, while still providing the depth needed to satisfy the hardcore fighting fans. Whether they succeed is anyone's guess - the demo isn't hands on, so we'll have to take their word for it at the moment. Injustice: Gods Among Us strikes next year.

"Without the fandom, you're more likely to see the shortcomings of Injustice: Gods Amongst Us."

He did it with Mortal Kombat X, and apparently he's doing it again.

Said to make use of the Mortal Kombat X engine.

Injustice and Secret Ponchos on PS4. Deadly Premonition and Hitman Trilogy on PS3.

AAA is finally hitting the Instant Game Collection on PS4 next month.

Injustice heading to PS4, but not Xbox One

Ultimate Edition to include all DLC, also heading to PS Vita. 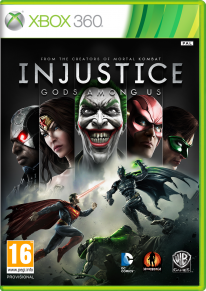