Making challenging gaming experiences has become very trendy - a non-controversial statement as an introduction to a controversial game. With developers like Deck13 Interactive -- who have thrown Lords of the Fallen and The Surge into the mix - as well as Ska Studios, who made Salt and Sanctuary, and Team Ninja with Nioh, a lot of developers have tried to emulate a difficult formula primarily reserved for From Software in the public eye. Toadman Interactive has joined the fray in the hope of securing a niche in the wide arena that is the extremely challenging action-roleplaying game. Luckily without reference to a certain trilogy, Toadman have released Immortal: Unchained and tried to create the first game in this genre focused on guns. Lots and lots of guns. A noble, and in and of itself a challenging concept, when you look at the foundations already laid.

Besides throwing around clichés like ultra-hardcore, ruthless gunplay, and legendary bosses, Toadman Interactive dives into a relatively unexplored concept of world-building regarding this kind of game. We aren't just talking about science fiction, but a brand of mythological science fiction, with clear ties to cinema like 2001: A Space Odyssey and the vastness of Nordic mythology. You control an unchained immortal (you know, just like the title tells you) released as a stop-gap solution to the end of the universe, and your mission is to the combat the evil force that has shrouded the universe across nine planets. Everything is sinister, solemn, and ominous, and jam-packed with some truly original ideas that drive the player forward to explore. Sadly, this is quite possibly the only good thing to say about Immortal: Unchained, as the rest of the game is lacklustre to say the least.

The game looks (somewhat) good, and we quickly noticed that Toadman Interactive has dropped the usual black, brown, and red colour palettes that frequent these kinds of games, in favour of blue, green, and grey. To our eyes, this is in many ways a nice change of pace, at least when it comes to the player characters and enemies. However, the textures in the areas you slog through are, to put it mildly, incoherent. Sometimes they're sharp, while other times they're stretched to such a degree that only a few blurred lines make up a hill or mountainside, and it's just subpar for a game with a AAA price tag. The cutscenes have some beautiful stills, granted, but the incoherent world sums up the whole of the Immortal: Unchained experience.

Let us begin with one of the most important aspects for hardcore action-roleplaying games; the combat. The battle between player and AI is of the utmost importance in this genre, because it is there that we experience the challenge. Storytelling, character progression, awesome cutscenes all take a backseat to this core experience. As a player in this genre, you can to be progressively challenged on your skills and ability to read and understand opponents. Immortal: Unchained manages this to an extent but on the entirely wrong premise. Games like The Surge and Nioh delivered adrenaline-pumping combat by focusing on clever enemy AI and interesting fighting styles. Immortal: Unchained doesn't even come close to being mildly exciting, not even in the boss fights, simply because it's really boring just to shoot things. Even worse, the awful concept of "waiting-until-the-opponent-shows-their-weak-spot-then-attack" is the prevailing design for all enemies in the game. The sloppiness of enemies and the poor AI also detracts from the experience, as enemy robots stop halfway up some open stairs to stare menacingly at you or decide that now is the time to chill as you blow their legs off with a grenade launcher.

On the second planet you gain access to Veridian, a suspiciously empty area which, as you step into the clearing, turns out to be a trap. A big, sword-and-shield-carrying robot jumps from beneath the mud, flanked by a horde of suicide bombers that jump after you and explode in a cloud of poison gas. In theory, this area should offer an extreme challenge and the player would need to deploy clever tactics to survive the fight with this menace and his horde of poisonous whoopie cushions. In Immortal: Unchained, however, you can sprint across to the other side and, voila, every opponent stops dead in their tracks. You can now easily pick them off, one by one. Nothing is stopping these enemies from charging you except sloppy AI programming. One of the final boss fights on this selfsame planet was easily overcome by just running in circles around the halberd-wielding robot - without using the dodge mechanic - and just using the shotgun until we won.

Speaking of grenade launchers, let us move onto the arsenal. In a game that flaunts its ruthless gunplay, we were led to believe that Immortal: Unchained would offer a well-balanced arsenal, where everything had its upsides and downsides, but ultimately offered the same core challenge. Again, this standard has been set by previous entries into the genre, but once again, Immortal: Unchained sadly breaks the mold by offering up no point in ever touching anything other than shotguns and SMGs. Sniper rifles are completely useless as most of the enemies don't even materialise on the level until you're close by, because the draw distance is honestly awful, even on the highest graphical settings; likewise a design based around surprising or shocking the player with sudden combat in some misunderstood idea of creating a challenging environment. Most enemies have therefore buried themselves underground, or they simply materialise when you're close enough for them to attack you.

Regarding these enemies, there seems to be a clear disconnection between concept and execution. It seems as if Toadman Interactive initially designed the entirety of the combat to be based around melee engagements, and then just decided to switch the weapons out with ranged options, without changing anything else. Even the enemies who have guns mostly choose to walk or run to the player and attempt to punch you in the face. Either that, or they stubbornly refuse to move to cover, or move at all, as they try to gun you down with their slow rifle. You can gently walk back and forth between cover, without being in any kind of danger, and take out what should have been a dangerous enemy. We simply cannot make head nor tail of the game mechanics on display here. Is it to promote a hitherto not understood idea of difficulty? The two different melee attacks offered to you do drastic damage comparatively, after all.

Difficulty is a tough pill for Immortal: Unchained in general. A challenge that strikes a balance between fairness and difficulty is, in general, a challenging task for many game developers, especially when it's locked like in Bloodborne, for example. Toadman Interactive hasn't managed to hit a fine balance here though, as there are extreme jumps between the fair and unfair brought about not by healthy and challenging enemy design, but by awkward level design or being swarmed with sudden enemies. Like so much else in Immortal: Unchained, the level design is incoherent, as the introductory level quickly becomes confusing because of its samey design; it's frustrating more than challenging, so to speak. The first planet, Arden, has a circular design which makes the level easy to navigate, but it's very short. Veridian, the second planet, is extremely linear and enormously long-winded, which causes endless frustration because it takes so long to get from A to B. If there had been challenges underway, it could have staved off the dead space, but no. It doesn't help that the player character moves at a dreadfully slow pace.

This is served with the mindboggling idea that the player-character can tumble off ledges and cliffs and fall to their death, while the enemy is saved by an invisible wall, which becomes especially annoying in boss fights. The point is, when you eventually get swarmed, you either die and must wander all the way back, or you tumble off a cliff and must get back on the level again. Without a parry feature, the only way out of trouble is rolling out of the way. A dodge mechanic that is bound to an attribute, by the way - not entirely to the player's reactions or the opponent's attack pattern. We even noticed some obvious input lag between clicking the assigned dodge button and reaction on screen.

To fight a horde of enemies with only two slow melee attacks at your disposal and without the possibility of parrying is annoying, and another frustrating element is the anonymous sound design. Most of the weapons sound the same, and the only background audio, besides ambiance, is the world's saddest violin that consistently wailed in our headphones. We had to turn down the music of the game, and put on something more up-tempo, firstly, to avoid falling asleep, but likewise to avoid ending up sad and depressed from the punishment Immortal: Unchained was.

We do want to emphasise one thing, though - Immortal: Unchained manages to be one of the first of its kind to make mouse and keyboard controls feel like a viable option. This probably has to do with the game being a boring shooter at its core, with some fancy numbers and percentages thrown in to appear as a role-playing experience, but nonetheless, it accomplishes this feat.

Otherwise, the game seems like a misguided idea that a niche in the market needed fulfilling and that it needed to happen now. We'd advise you to steer well clear of this game not only because it doesn't satisfy the hardcore itch that some players might have for difficult games, but because the execution is poor on almost all levels, making everything intensely frustrating.

Advertisements
Gamereactor UK
+
Interesting world-building, Manages to make keyboard and mouse controls a viable option.
-
Incoherent level of grahics, Level design and difficulty, Poorly executed concept, The price tag is steep, Sloppy artificial intelligence.
is our network score. What's yours? The network score is the average of every country's score

Immortal: Unchained has just got a Storm Breaker expansion

After the fall of Apexion you must explore the Sea of Scars and ruins of Storm Break, seeing what mysteries await.

Immortal: Unchained is up on today's livestream

We're taking on the hardcore RPG.

Immortal: Unchained gets a launch trailer

Sci-fi Souls-like is heading to PC, PS4, and Xbox One in September. 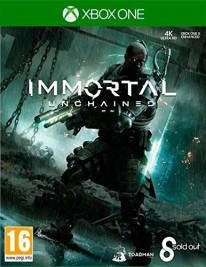