Anyone who lives in Berlin, is still relatively often confronted with the consequences of World War II. House walls with bullet holes still are a regular part of cityscape. Also old bombs are found in construction sites, dangerous legacies of the past. Thus, it was s strange feeling to participate in the bombing of my own city in 1945 - in a very real and sometimes very depressing action flight simulator called IL-2 Sturmovik: Birds of Prey.

PC gamers know IL-2 Sturmovik since 2001 as a fixed term. Air combat and air-ground battle of the authentic kind already existed back then. In 2009 it's sort of the same, just extra polished. The most amazing thing however ist, that the developer has succeeded in establishing a great balance between the ultra-hard simulation approach that characterizes the original game and also making IL-2 Sturmovik: Birds of Prey accessible to amateur pilots. A fact that then should also explain about one million downloads for the demo on Xbox Live and Playstation Network.

The game puts us directly into the life of a pilot in the Royal Air Force in 1940. Germany overwhelmed Europe with the Blitzkrieg and wants to conquer the British Isles, with the help of their air force called Luftwaffe. We must cooperate in preventing just that and also fight back in five other campaigns too.

Before the actual game starts, there are some well-crafted (and badly needed) flight training missions. The numerous diary entries and cutscenes give the unnamed hero a face - and especially the many original recordings from the war years provide an authentic, often oppressive atmosphere.

The flight instruction is not only instructive, but also defines the degree of difficulty to be used throughout the game. With the basic training the arcade mode unlocks, a convincing package with simple controls. This mode will suit almost any regular player to enter directly without major hurdles into dogfight. But despite that beginners will need a while until they get used to the controls. However, this is almost always the case with flight simulators.

Somebody who also successfully completes the optional training missions, will be rewarded with realistic mode and simulation mode. Realistic mode asks you to have some deeper knowledge of flying to actually play. Simulation mode can only be mastered by masochists or real pilots - at least I have not managed to even unlock it.

Honestly, the simulation mode is probably more of a respectful nod to the hardcore fan base than a doable thing for the masses. Certainly the old school fans will highly appreciate that the developers have worked for years to hone the precise implementation of flight characteristics of old bombers. But if you have ever tried to keep a stubborn Spitfire under control using rudders, you'll soon realize that this is not a task for a novice. This tough mentality is also obvious in arcade mode. IL-2 Sturmovik: Birds of Prey is not just super easy to play, but never ends up being too difficult or even annoying. The aircraft react how we would imagine old planes react: a bit portly, very mechanical. Nevertheless, just right, somehow.

The single player offers six campaigns and 20 missions plus 48 single missions that can be playes separately. The air battle takes us from the Battle of Britain (June 1940-May 1941) to the Battle of Berlin (April / May 1945). In between, Stalingrad, Sicily, Kiev and the Ardennes - a whole different hell for each battle. About 45 aircraft are included in the game, during the campaign we are only allowed to use Allied material. 12 bombers and fighter planes are in, from the agile Spitfire up to the heavy B17. We rack up quite some playing time, if all primary and secondary targets of the missions were to be completed.

Multiplayer with up to 16 pilots at hand contains four modes: dogfight, deathmatch dogfight, ground attack and a capture the flag variant where we have to take over the opponents air airport. Standard stuff, but due to not always easy controllable planes this ends to be a genuine and intense competition. The dogfights too often take quite a while and need a lot of tactical finesse and strategic planning. Not quite everyone finds this too interesting. The two latter modes offer a little more straightforward action.

The air battles in IL-2 Sturmovik: Birds of Prey are staged extremely beautiful - also in detail. As we fly over beautiful landscapes that often don't smell like a lot of trouble, the following battles are explosive, intense and visually excellent. Incredible amounts of planes and bombers in formation - that feels awfully painful although it is not real.

Different-sized bullet holes pinched in the wings by machine guns or flak. Incredibly realistic smoking engines. Discreet oil splashing onto our plane after directly hitting the man upfront. Or just the smoke streaks MG-shots leave behind. Right in the middle of cockpit war, this is what it most probably looked and felt like back at that time in real life too. Phew. Once one is really happy that this is just a game today. A game in which the developers have really put very much attention to authenticity and detail.

Gamereactor UK
+
Intense air battle, great visual presentation of planes and surroundings.
-
Sometimes a little too hard, Multiplayer is somewhat lame.
is our network score. What's yours? The network score is the average of every country's score 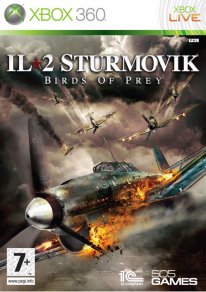