For those of you who have been living off the grid, possibly in a cave - how thematic of you -Ice Age is quite the successful film franchise. The series has spawned feature films, a fair few short films, TV specials, a live show on ice, and some video games. If you've missed all that, we applaud your resistance to popular culture. Long story short, it's nigh on impossible to have missed Ice Age, especially if you're a parent, and thereby hangs our point; this is a franchise aimed at kids.

Scrat is a sabre-toothed squirrel who loves nuts. He provides some rather entertaining moments in the films, certainly, but sadly this adventure of his falls a little bit short. It's not a terrible game, but yet it could have been great.

The story goes like this: Scrat has lost his acorn in an ancient temple, and you must run, jump and scramble up walls through a series of levels looking for four crystal nuts to open up the temple. This is all while using some kung-fu style attacks and throwing things at beetles and other creatures who are trying to stop him. That's it, in a nutshell.

The major problem is that it's all a bit unchallenging. Even younger gamers will find nothing here that's too taxing. We can look beyond the game's other issues, but the fact that only the youngest of players will find a challenge is something we need to stress.

You mainly run around picking up little purple crystals, climbing up walls and jumping onto platforms. The crystals open up artwork as an option on the title screen. If you die, you don't lose your crystals. In fact, there's very little punishment for falling into the water or getting beaten to death. There's nothing to it other than that. Sure there are some hidden treasures that are easy to find, or simple puzzles to open doors where you must throw a rock at some glowing panels that are right in front of you.

The combat is simple, with only one button to press to unleash your attacks, however, you can mix things up by throwing something at your foes. The fights became a bit annoying quite quickly, feeling like more of an irritation than a challenge, knowing that we had to spend some time fighting beetles or whatever.

Graphically the game looks pretty good. It's nice to look at unless you get in a bit too close. Much like the rest of the experience it just feels a little unpolished. There was a bit of glitching that allowed us to look through walls, and if Scrat got into a tight spot, the camera would pull in a bit too tight and the textures would end up looking a bit fuzzy and rough around the edges.

So what did we like? Well for one: the level design. Even though they were pretty linear, the developers have managed to make them look open. In fact, this was something we were pretty impressed with. We enjoyed the layouts and how free we felt when exploring them. Another positive is the main character, Scrat. Sure, the squirrel can only make grunts, whimpers and yelps, but it's somehow pretty entertaining.

Aside from the fact that there is very little challenge, this game does do everything a platformer should. You jump around, searching for things and fighting enemies, and we are pretty sure that younger gamers will get something out of this. Obviously, grownups are not the target audience, but there are so many 3D platformers out there like Spyro and Crash that can be enjoyed by adults and kids alike. So, there it is: the lack of scaling challenge alienates adults and older kids from having what could have been a lot of fun.

The controls themselves are pretty intuitive and that, combined with the good level design, made this easy and accessible to play. That said, once you've played through the first level, you've pretty much seen everything that the game has to offer and it gets a bit on the repetitive side.

The only other things that we need to report are minor cosmetic issues. The fact that the shadow under Scrat is just a blob, while the shadows under the beetles look great, confused us as to why this hadn't been polished up a bit more. Then there's the fact that if you pull the camera in towards Scrat his fur seems to vibrate while moving away makes him look better.

In a way, we feel we've been a little tough on this game. Sure, there's little in the way of challenge, some unpolished visuals, and a feeling of repetition, but aside from that it's got decent core gameplay, it looks good, and it does all the things a platformer should do. You can even open up new powers that let Scrat to jump higher and lift heavier things, helping him find all the treasures that the game has to offer.

All in all, we felt like this was a bit of a missed opportunity. It had potential and we feel with a bit of polish, some variety, and more of a challenge, it could have had much broader appeal. The youngest of gamers might get something out of this, but if you are looking for a 3D platformer for all the family, maybe look at games that offer a sterner test and greater replayability.

Gamereactor UK
+
Looks good and does everything a platformer should.
-
Lack of challenge, at times too repetitive, minor graphical issues and glitches.
is our network score. What's yours? The network score is the average of every country's score

Ice Age's iconic squirrel is getting his own journey to retrieve a nut once more, and marketing manager Natalie Griffith spoke to us about the title.

We only have a few months until we can guide Scrat to his precious Acorn on PC, PS4, Switch, and Xbox One. 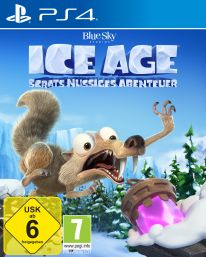