Dynasty Warriors only needed the right context to sell itself to a wider audience.

The multi-generational franchise has swallowed many formats as its told, and retold, its take on China's Three Kingdoms tale in a sprawling soap opera that clashed words with swords over the years, but with gameplay remaining stagnant, it was the storytelling that drove the action. If you weren't familiar with the story, you saw little than the button-mashing as single combatants tackled enemy armies alone.

The premise has had gradual tweaks over the seventeen years since the original title, but a general overview is mostly the same. Each campaign consists on a multitude of interconnected hub areas into which you charge, spreading your time across key strategic points in which allies need protection, key enemy personnel need challenged and defeated or enemies held back to stop an area being overrun. The central idea: save friends and the kingdom, become legend.

The franchise has been a moderate success in the West as well, but Tecmo Koei's wisely branched out, overlaying the solid gameplay template with licensed tie-ins to attract more players. So we've seen space robots combat in Gundam, and future apocalypse fisticuffs with Fist of the North Star. Fans of those series get the gameplay, as its filtered into context that they're familiar with.

But even those titles are cult when compared to the renown of The Legend of Zelda series. This is context accessible to a much bigger audience; we understand defending Hyrule Castle, rescuing Princess Zelda, tasks well-worn in our collective gaming consciousness. We've swung Master Swords, defended with shields, used items, charged magic meters for years now. Familiar setup, different conditions.

So the overlay makes us all the more interested to trying out this marriage of the two series, a one level demo of which is playable as part of Nintendo's E3 2014 tour. We replay through the stage twice more, to get a better feel for the combat, the mechanics, and the different fighters - Link and Princess Zelda (who can look after herself).

We've the same third-person camera from both series, but the nippier control of Warriors. Link's got his roll, shield defense, but after a few seconds running in any direction he'll start dashing. It's more Sonic than equipment-heavy warrior, but the need for speed is to get him across the fields of Hyrule as quickly as possible.

A min-map at the top left of the screen gives an idea of the layout, multiple hub areas interconnected by paths, bridges, and flashing Xs indicating the next mission. You're free to run mostly anywhere, and focus on slashing through the Moblin hordes that swarm everywhere.

But those mission objectives are vital - a story-driven event unfolds, a boss to topple, a dungeon that needs exploring - and the game handles the urgency tidily. Two decades of conditioning sends us charging as the words "Zelda is in danger" flash across the screen. You've got to regress back to SNES/NES era Zelda titles and remember you don't have to tackle every enemy on screen to progress - only mission-sensitive ones.

And the screen is constantly moving, Hyrule's fields are rippling with Moblins, Hyrule soldiers and Goron warriors, giving a decent approximation of two armies going to war the less you focus on what they're actually doing. Stop and watch, and for the most it's like an awkward singleton date night at the local pub, NPCs rubbing past one another and staring into middle distance. You just need to replace spears with pints.

But these massed faceless combatants are mainly background detail to give the illusion of a full-out invasion, and the enemy's side is mainly used for combo practice and gradually charging your special attack meter with each successful hit, which when filled can be activated for a stronger strike. Best saved for the real clashes, such as against Lizalfos (in which the returning targeting button lets you get behind them when spew fire to hit their weak spot), Moblin Chieftains who hold key forts that need to be recaptured, and the demo's end boss - the familiar lizard King Dodongo.

Downing him requires tossing bombs into his opened mouth, then attacking his side when the resulting indigestion topples him for a few seconds. As with other Zelda games, additional combat weapons will be found on your travels and you can switch between them with a D-Pad press.

However in a shift from the Zelda legacy, finding them - so far - is far from taxing puzzle work. The booms we're guided to on the map, rushing down a 'dungeon' (in truth a descending stairwell with a chest at the bottom) and grabbing them from a chest. In keeping with the faster-pace gameplay, H.W Link can toss bombs as quickly as you can hammer the corresponding button, carpet-bombing anyone nearby. There's even a short-term upgrade that lets you toss a single oversized explosive, which works great with bosses.

In the demo we've a generous allotment of HP Hearts, and more are easily sourced from downed enemies, who also drop Rupees (exactly what you can buy for them is unknown so far) and magi vials, that recharge your magic meter. Filling that allows you to use Focus Spirit, either buffing up your stats for a short while, or using it all in one powerful special attack.

The attacks are fun to play around with, and the demos end before we get a fuller appreciation of their scope. Each character will have a small number of weapons to bring into battle with them, each altering feel and range. We try Link twice - once with Master Sword, the other with a Fire Rod. The former allows the Hero of Hyrule to be more nimble on his feet, faster chain attacks, along with one dashing attack that pulls enemies in its wake, and a jumping downwards slash. But while heavier to wield, the latter seems to have more combat options currently, with area-based shots, fire wind uppercuts and a semi-controlled flame flower attack.

Our third time through is with Zelda, the princess only having access to a rapier currently, but has access to a long-range bow for her special attack, letting her fire up to three times in quick succession, each shot causing her to leap higher in the sky and the area damage to increase.

We came away pleasantly happy with what we experienced. There was nothing revolutionary about the concept, but the context at least gave us not only an entry into the Dynasty Warriors universe, but also a chance to enjoy a combat-heavy Zelda experience that we'd only really get in small portions with the Super Smash Bros. series. While the visuals weren't as sharp or as rich as the HD retail releases we've seen on Wii U so far, we'll hold out judgement come the game's release in September. We do know this will be a Dynasty Warriors game there'll be a queue to review at the very least.

There's a nice surprise in the Boss Pack.

Hyrule Warriors has sold over one million units

Timely expansion of Wii U title next month.

Eiji Aonuma reveals the return of a princess.

Link adds a new spinner weapon and all other Smash Bros. characters will add other bonuses. 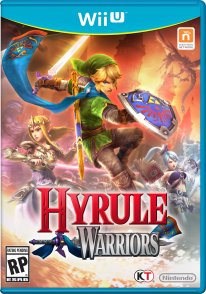