If you're a fan of the Warriors series, Dynasty or otherwise, you'll know what the crux of the appeal is: getting an overpowered warrior and running through hundreds of grunts at a time with every attack, racking up a sizeable body count in minutes. This power fantasy has crossed over with a handful of other franchises, including Nintendo's own The Legend of Zelda, as Hyrule Warriors was released on the Wii U back in 2014. And now it's rearing its head once more in the Definitive Edition for Switch, and we've been getting reintroduced to Link's Musou adventure.

The story is essentially classic Zelda - evil has befallen the land, Ganondorf is back to stir up some trouble, and it's up to you (Link, not Zelda - don't get that confused, whatever you do) to save the world and restore some order. As with most Warriors games though, the story is backseat to the mechanics - the hacking and the slashing as it were - so you'll be wandering from battlefield to battlefield for various contrived reasons to create more and more dead bodies for the Hyrule caretakers to sweep up afterwards.

Of course, this premise is no different from the Wii U version, but it's worth reiterating since a lot of players may be coming on board for the first time (the Switch has a lot more fans than its predecessor, after all). Warriors fans will know the UI very well but, for those who aren't, essentially you have a mini map in each mission which points to the areas of the battlefield you must visit to hit various objectives, i.e. save someone in distress, kill a mini-boss, capture this stronghold etc. Once you do enough of those, the mission ends, you get a rank, and it's onto the next one: simple.

What's not simple though is the rest of the UI, which is just as cluttered as in the other Warriors titles. While it's par for the course and a bit expected that this rather bloated and text-heavy UI and instructions will be in regular Warriors games, since a lot of people will be coming on board from the Zelda/Nintendo camp this might come as more of a shock if you're not expecting it. Tutorials are delivered in big old chunks of text you have to constantly click through, which become tedious real quick, especially since it stops the bombastic action dead in its tracks, which also applies to menus like upgrading your characters.

That said, those who are indeed coming on board as Zelda fans with green hats and ocarinas by their side will no doubt find a lot of fan service in here to set them squealing with delight, as from the very beginning we're introduced to music, characters, and places from the older games like Ocarina of Time and Twilight Princess. There's even a Breath of the Wild costume with this version to get the modern-day fans on board, so although there are some original features, this is sort of a greatest hits package in a way.

What else is new though? Well, for a start there's HD graphics with 60 FPS, meaning that the action looks crisp and smooth even when bodies are splashing about as you swing your sword around. What's more is that every gameplay improvement from the 3DS version, like swapping fighters in the middle of battle and hero commanding, has made it through to this one too, and of course what would a Switch title be without co-op using a single Joy-Con each, made easier by the fact that the controls mostly revolve around Y and X, light and heavy attack respectively, with A thrown in there for a special attack every now and then. That said, there are some extra bells and whistles you'll be making use of in battle, including locking on with L and using items like bombs to break walls and kills monsters, so it's not always a button-mashing bonanza.

We're also treated to 29 characters because not everyone wants to play as Link all the time. Here we can switch between everyone from Zelda herself to Linkle, Princess Ruto, and Impa, all of whom are just more treats in the fanservice goodie bag. With each having their own abilities and moves, and customisation options aplenty, there's lots here to spice things up, especially when you consider all DLC content for the original. Included in this Definitive Edition from the start are the Hero of Hyrule Pack, Master Quest Pack, Twilight Princess Pack, Majora's Mask Pack, Boss Pack, and much more besides.

Of course there's always the added appeal of having the Switch's hybrid functionality as well, meaning that you can take to the battlefield both on the go and at home in the dock, although as with a lot of games we'd always recommend using the Pro Controller if you have the option. Aside from that though both versions perform well and look the part, even if the UI issue is accentuated that little bit more when in handheld mode on the smaller screen.

It's called the Definitive Edition, and we can't dispute that, as this version of Hyrule Warriors doesn't just throw in some added bits and pieces, but really is the complete edition of the game. For the many who missed the boat when it first rolled around on the Wii U, this is the best way to experience the game now. It looks great, it plays great, and it has plenty of content through both the base game and the DLC packs included herein.

Advertisements
Gamereactor UK
+
Lots of stuff for Zelda fans to enjoy, Plenty of added content in this edition, Looks great visually, Fun gameplay transfers over to Switch, both docked and undocked.
-
Text-heavy and cluttered UI, Can get a touch repetitive.
is our network score. What's yours? The network score is the average of every country's score

"It looks great, it plays great, and it has plenty of content through both the base game and the DLC packs included."

Nintendo use more of its Wii U back catalog to bolster Switch line-up. 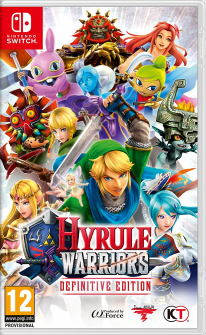