Ever since Fortnite took the world by storm, a number of new battle royales have appeared, providing plenty of opportunities to fight for sweet, sweet victory. What's more, the overwhelming success of Call of Duty's Warzone proves there is plenty of life to be found, which is why Ubisoft's venture into battle royale is so exciting. Set in a digital, futuristic world, this take on BR combines tight gunplay, lightning mobility, and powerful abilities to create an experience like no other. We are talking about Ubisoft's newly announced Hyper Scape.

In the future of 2054, the planet is in a less than desirable place. Once a pearl of the Solar System, the Earth has become wrought with environmental and social issues, leading residents to look for comfort in a freer, digital world. The Hyper Scape is this place. A sprawling digital social hub where users are no longer limited by their feeble, physical bodies. Think of it like Ready Player One's OASIS. In the Hyper Scape, however, users can head to specific places, such as the gruelling, exciting Crownscape, to test their mettle in a state-of-the-art, first-person battle royale. To be clear, as expansive and brimming with potential as the concept is, the game Hyper Scape is only the BR. The rest is yet to be explored.

Built with a similar movement and gunplay feel to Apex Legends, yet based in a Crackdownesque world, Hyper Scape tasks players with being the last team standing in a lobby of 100 players. The title puts emphasis on three main areas: mobility, abilities, and gunplay. The latter, gunplay, feels fantastic here, actually to the degree of Warzone or Apex's shooter mechanics. The brilliant part of having such a tight-playing FPS system is how it does not limit the player's ability to perform, in fact, it only elevates it. The issue with the system, however, is not how it feels but how some of the weapons perform, because in a fast-paced BR, slow playing, close-quarters weapons can be hard to find value in.

For example, the assault rifle known as the Ripper is a great all around weapon since it provides stability and consistent damage with high crit values across decent ranges, however on the flip-side, the mini-gun is a little lacklustre due its lower damage values, lower accuracy, and slower aim-down-sight movement speed. This problem only gets worse with the upgrading system. Whilst you can find higher-level weapons as floor loot, you can also upgrade by fusing it with another of the same type, increasing damage and ammo count. For competitive weapons such as the Ripper, this system works fine, however for the lesser weapon types, even a higher-level version will likely lose to a more mobile, consistent weapon - at least in my experience so far.

Another great example of this is in close-quarters. In theory, the shotgun should dominate by being able to unleash large amounts of critical damage at point-blank range, however, the grenade launcher (which is commonplace loot, not a rare weapon) thrashes the shotgun with its high-splash damage proximity mines. With lower levels of mobility, the accuracy of the shotgun could reign supreme, but the ability to not have to directly hit an opponent makes the grenade launcher much more efficient at bringing down foes, especially in enclosed buildings.

Alongside weapons, Hyper Scape has plenty of abilities, known as Hacks, to play around with. These are pick-ups fitting into a competitor's loadout, each offering a unique move or deployable that can drastically shift the pace of a battle. From explosive mines and domineering walls brilliant for area control through to teleporting or invisibility to help you escape sticky situations, Hacks offer plenty of opportunities to alter the way you play, and they even provide chances to assist your team.

Hacks are split into three categories, with the first two being personal abilities and deployable items, while the third is support and can provide either healing or protection for your team. The problem with support hacks is how they operate since getting value requires players standing in a relatively small area of effect circle, which is not ideal mid-fight. To keep them feeling useful, they too can be fused into higher quality items, except this time the change is their respective cooldowns, making the fusion of hacks a very desirable feature, especially as games reach their pinnacle.

The mobility channels the same sort of movement techniques used in Apex Legends, empowering the verticality of its kits. This means height is no obstacle and likewise, evasive techniques can be airborne since vaulting, double jumping, sliding, mobile abilities and commonplace launch pads remove the need to be boots on the ground. By giving skills of this degree to its players, Hyper Scape's map design can be tighter, yet deeper than that of other BRs.

Unlike Fortnite or Warzone, the Neo-Arcadia map is smaller but much more diverse. Split into nine districts, each with their own landmark (a hotspot), the map has less open space and more urban areas, meaning more buildings and likewise mobile combat. The design takes inspiration from European architecture crossed with futuristic concepts, creating a hybrid yet beautiful world. By combining the density of its urban planning with this design, Neo-Arcadia makes for frequent combat, which is only accentuated by the rapidly disappearing districts.

Hyper Scape doesn't use a storm or a cloud of gas, instead, as the game progresses areas of the map will decay and all the contents found in a particular section, including the buildings and loot, will vanish, leaving a huge, flat, open area perfect for leaving you caught in a crossfire. With a design such as this built into the gameplay, players will find moving to the next zones almost mandatory, since decay changes the map into an empty shell of itself. For me, this was the hardest thing to adapt to, as other BRs provide opportunities to make up for mistakes when engaging in drawn-out fights. Here they are often death sentences, with the deletion of loot in decayed areas only adding to the punishment.

Fortunately for players, Hyper Scape is not hardcore all the way through, in fact, it has what may be one of the best additions to the BR formula in the form of its Echo system. Instead of being defeated and having to sit out until your teammates buy you back or reboot you, players in can exist in the game as an Echo, running around, pinging enemies and communicating with team members in an immortal, yet corporeal form. Echoes cannot fight, be attacked, or be seen by enemies, and can only be revived at reset points that drop on defeated foes. Essentially it means you can only come back into the fight if your team are being aggressive and are engaging in combat. Likewise, reset points also disappear in decayed zones, meaning as the game develops, there are fewer opportunities to be brought back.

On the topic of endgame content, Hyper Scape's Crownscape mode actually provides a secondary way to win. Players do not have to slay all other opponents to secure the victory, instead, they can chase the crown that spawns in the final moments of the match. The team who holds the crown for 45 seconds will win, but it is not that easy since picking up the crown puts a massive target on your back, broadcasting your location to enemies. It is a great addition to give fractured teams a shot at victory and likewise also keeps full squads on their toes.

Finally, Hyper Scape does have customisation available to players. There are options to change Champions (playable characters hailing from a variety of nations), equip new skins, try new emotes, play with new melee weapons, and even tweak your drop pod appearance. All customisation content can be acquired through the battle pass system, or through the store planned to be added in a future iteration of the game.

Pulling everything together: Ubisoft's foray into the genre looks like it's going to be an exciting take on the battle royale formula. With its combination of tight gunplay, high mobility, powerful abilities, and intense gameplay, Hyper Scape should be a firm competitor in the competitive BR space. By having unique features such as the Echo system and zone decay, players will have to adapt to new twists that change the way we play these kinds of games. Hopefully, with the right support and frequent content drops, Hyper Scape can retain its fresh feeling and not be drowned out by the demands of keeping up with its already well-established competition.

Hyper Scape lands on consoles, alongside PC, in August

Ubisoft's Hyper Scape and its first-season content is set to release for PlayStation 4 and Xbox One in August.

We got another look at Ubi's battle royale shooter during tonight's event.

We're hopping into the recently revealed and released Hyper Scape technical test to test our skills. 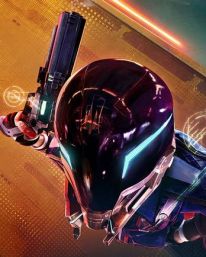