Recently Nintendo held a pretty jam-packed Nindies presentation, featuring a bunch of new, smaller games arriving to the Switch in the near future, but one of the biggest announcements happened shortly after the presentation instead of being featured.

We're talking about Heart Machine's much beloved Hyper Light Drifter, which is set to debut on the Switch sometime during the summer.

The Switch version has yet to be shown, either through screenshots or trailers, but we presume this will happen momentarily. Either way, is this something you're excited to get your hands on?

"It wears its retro influences proudly on its sleeve, whilst also implementing its own character and flair."

These are coming next week, as part of the Epic Games Store's continual offerings of free titles on PC.

A Hyper Light Drifter TV series is being worked on

Developer Alex Preston has been in talks with Castlevania's Adi Shankar about how to translate the game into a series.

This wasn't even a part of the Nindies stream.

We play a couple of newly released indies on today's stream.

Hyper Light Drifter dated for PS4 and Xbox One

Plus updates on the Vita and Wii U versions.

Wii U version of Hyper Light Drifter in limbo 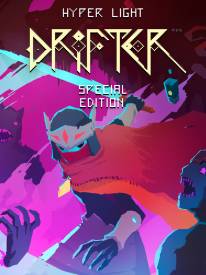