Easy Trigger Games has announced that its side-scrolling action title Huntdown will be coming to Steam on May 12. The title that first released on May 12, 2020 to PS4, Xbox One, Nintendo Switch, and PC via the Epic Games Store is finally coming to the rival storefront, one year later.

This release will also see the addition of some new features coming to the game, including a brand new Arcade game mode (that is actually Steam exclusive for a few weeks) that is score-based and sees you face "hordes of enemies with a wild range of over-the-top weaponry," as the Steam announcement post states. There will also be a global leaderboard for this mode for you to compete with others over.

The Steam release will also utilise the Steam Remote Play system as well, which is especially handy as couch co-op with friends can still be a little tricky to play these days.

Make sure to check out the Steam release trailer below, and also be sure to read our review of Huntdown over here.

Huntdown coming to Steam on May 12

After a year on the Epic Games Store, it's finally hitting the rival storefront.

We play the opening hour of indie hit Huntdown

The latest entry in our ongoing let's play series sees the GRTV team take on the critically acclaimed retro-platformer.

We're experiencing the mayhem of Huntdown on today's stream

The retro-futuristic 16-bit action-platformer Huntdown is available for pre-order now, set to release next week.

We play Huntdown with Coffee Stain

"Oh, the horror" as we struggle with hockey players and an ex-soldier dealing with PTDS. 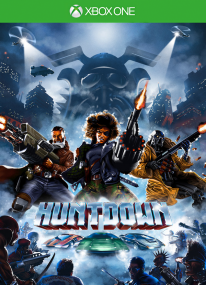