Even though it was originally looking to release back in late April before being hit by a delay, we're now only a few months out from being able to check out Amplitude Studio's upcoming 4X strategy title Humankind. To get an idea as to what we can expect when the game does eventually debut, I recently attended a preview event, where I got to go hands-on with Humankind, playing through almost a complete game.

For anyone who doesn't know what a 4X strategy game is, they are titles that revolve around the four ex's; explore, expand, exploit, and exterminate. Humankind fits perfectly into that classification as it is a sprawling strategy game that sees you re-write the narrative of human history, using expansion, diplomatic, and combat mechanics to impose your will. It does so using a turn-based system similar to other 4X games, such as the Civilization series, meaning after you've completed every action you see fit and have nothing left to do in a turn, the timeline progresses forward a little more.

With the idea framed around re-writing human history, Humankind starts in the Neolithic period, around the same time that humanity began to settle and explore agricultural farming. This is the first era of the game, with eras being the way that Humankind differentiates between the various leaps in history. During the Neolithic era, your goal will be to explore and grow the size of your tribe by visiting Curiosities dotted around the map. These will reward food necessary in expanding your population as well as various other important resources such as Science (to help research new technology) and Influence (to be able to expand your civilization's reaches). Visiting Curiosities and gathering resources in the Neolithic period is of the utmost importance, as it is also the primary way to earn the era stars required to advance to the next era of human history.

Era stars are rewarded when a player reaches a milestone in a specified challenge. For the Neolithic era, this could be having four separate tribes, or defeating two different types of animals in combat. This is one of the main ways Humankind differentiates itself from other strategy games, as its timeline only advances when a civilization reaches the required amount of era stars during an era. When a player has enough stars to progress forward (from say the Neolithic era to the ancient era), the option is available to do so right away, but you can also choose to stick in an era for a while longer to grab some more era stars to be able to boost your fame rank.

This brings me to the next major point that sets Humankind apart from other strategy games, which is the fame rank. This is a way to see just how active a civilization has been over the course of a game. It isn't necessarily a win condition, but if a player is making the effort to earn extra era stars, build world wonders, or discover natural wonders (just a few of many methods to increase your fame rank), the chances are that player will also be quite a force to be reckoned with in the game as well.

But what happens when you move up an era you ask? Every time you amass enough era stars and advance in history, you get the chance to select a Culture. Cultures are ways of defining the civilization you want to become that little further, and are reflections of the time period you are in. For example, the ancient era will allow you to choose between Egyptians, Babylonians, Mycenaeans, just to name a few, whereas the classical era can range anywhere from the Romans to the Huns to the Maya.

Every culture has a unique set of bonuses that defines it: The Egyptians are regarded as great planners and excel in offering bonus production to their cities. They can also build the Egyptian Pyramid and utilise the unique Markabata unit. The Romans on the other hand are more framed around combat, and offer an extra unit slot in each army you have. The really unique part about the culture system is that it doesn't completely define your civilization over a game. At each new era, you can select a different culture to get new bonuses, for example, you might have had enough of being an Olmec in the ancient era and instead fancy your luck as the Greeks in the classical era. You'll even retain certain parts of a former culture thanks to the legacy trait if you decide to switch, and this can happen up to six times during a game - as there are six unique eras to travel through.

When it comes down to building your civilization, Humankind doesn't seem to be all that different from other strategy games. You have cities that you can expand by constructing buildings and handy districts over several turns, there's not much else to harp on about there, it's very run-of-the-mill. And that also applies to the technology tree. You select the technology you want to research next, and a few turns later you can reap the benefits. The familiarity isn't exactly a negative though, as it does make the game much easier to pick up and understand, provided you have a baseline knowledge of 4X strategy games.

The combat is a little different, however. It's turn-based and asks you to command your armies to make a certain number of moves within each turn. The biggest issue I noticed is that the outcome is often decided before fighting even starts, as you can clearly see how ally and enemy forces match-up in a core, base statistical sense. Essentially, if the game tells you you're probably not going to win a fight, even if it's by a slight margin, there's not a whole lot you can do, in a strategic manner, to pull off a victory.

Then there's diplomacy, which is a system that seems to still have some things to hammer out here and there. You can clearly tell that Amplitude is putting a lot of focus on this part of the game, but it does feel a little complex. Sure, it provides plenty of options, but without a deep understanding of the game, it looks like it could fall to the wayside for a lot of players.

Humankind does also use an avatar system unlike any other strategy game. Your avatar can be customised and will evolve as you play the game to reflect the cultures you choose. Considering your avatar can also be used by friends as foe to face in-game, the unique nature does add a little more personal depth to the game.

From what I've seen, Humankind can be a contender among the best 4X strategy games. Can it knock the titan that is Civilization off its pedestal? That will remain unclear until release day, but we can at least look forward to another interesting strategy game to further bolster the genre, and for that reason, I will remain excited for Humankind.

We've been encouraged to keep an eye on the PC Gaming Show for more details and a "surprise announcement".

The strategy title will no longer be released next month.

Humankind is now available for pre-order

The announcement follows the release of a brand new gameplay trailer.

Here's how you get started in Humankind OpenDev

Amplitude Studios explain how players can get started in its community-driven development feature OpenDev. 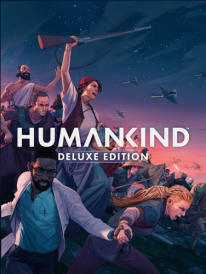