Curve Digital and No Brakes Games launched a Workshop Competition for Human: Fall Flat back in June, offering a $10,000 USD prize for the creator of the best level, and now the pair have revealed two winners, with each receiving $10,000 for their entry.

These are now becoming official levels, with Manuel Nowak creating Thermal, while Tyler Ehninger made Factory, both of which you can see in the trailer below. There are a variety of gameplay options in there, like ropes, bridges, mechanisms, moving platforms, and more.

Both of these levels are coming to Nintendo Switch, PC, PS4, and Xbox One early next year, and this is just the start of the upcoming plans to release free levels and skins. Also, another Workshop Competition will be revealed early next year as well.

Those who want to get festive can do so with the Christmas Lobby returning to Steam, including the fireworks bazooka, and Human: Fall Flat is on sale across all platforms, in case you have yet to try it out.

Are you impressed with these creations?

"Imagine Gang Beasts, but you've got puzzles to solve while being harassed by others."

There are two levels that caught the eyes of Curve Digital, and we'll be getting them as an update in 2020.

The Dark Update has landed in Human: Fall Flat

Not only do you have 13 new customisation features to personalise your character, but the Dark level offers some new challenges.

A discount has also landed via Steam's Lunar New Year sale, celebrating five million units sold on top of everything else.

Curve Digital has revealed that No Brakes Games' Human: Fall Flat is getting a new free level by the name of Dark, landing today in the Steam version of the game, with... 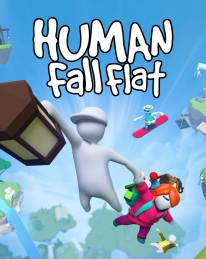