The concept is absolutely brilliant; Robin Hood and his gang of merry men rebelling against high taxes by stealing money from the state, where computer-controlled opponents guard the treasures, and teamwork is crucial to success.

The idea is really great and in several ways really made for me, who thinks co-op is among the best way to experience games. But, of course it's important to get all the elements together for a really good game as well, and fortunately, Sumo Digital are skilled developers. So, in theory, this should be walk in the park.

In recent years, the Robin Hood saga has moved towards becoming increasingly "dark 'n gritty". The original was certainly a more hard-boiled story than the Disney movie, but I wouldn't call it particularly dark. However, this is the horse Sumo Digital has chose to bet their money on and consequently we get a Robin Hood that looks to be taken straight from early Assassin's Creed games, Maid Marian is suspiciously similar to the female protagonist in Assassin's Creed Valhalla with lots of hip tribal tattoos, Tooke has hairstyles worthy of famous soccer players and only Little John feels reasonable (although he looks more like a WWE wrestler than a medieval character).

Since Hood: Outlaws & Legends is exclusively an online game, you get to play through a mandatory training course before embarking on the online bit. Here you can quickly try out all four characters and test their respective advantages. But already here, unfortunately, I began to sense a little trouble. The controls are not at all very responsive and the artificial intelligence of the computer-controlled opponents feels almost randomised, while they walk around repeating the same sentences over and over again to themselves.

Even the combat system felt unimaginative with lack of flow, I nervously began to realise that I was going to be let down by a game I initially was looking forward. Basically, the heists are about several parts, from getting to a certain target, stealing it, getting to the escape point and loading it on board a vehicle to escape. But you're not alone. For reasons I cannot figure out, another human team of identical Robin Hood fighters is trying to steal the same treasure at the same time, so you'll have to fight both computer-controlled enemies and these players.

The game has a hub world around a bonfire, where you can take care of your character and choose to choose to go on a mission. But if you've played Payday 2, Sea of Thieves or Borderlands 2 before with randomly selected players, you know what a hell it can be when people don't communicate at all. And that's what it usually looks like these days. Most people don't communicate, probably a sad result of all the harassing online.

Consequently, the matches begin unsurprisingly with my fellow players instantly running separately. No one seems to be focused on picking up the treasure chest, someone draws the wrath of the guards by alerting them, another nut comes with me but refuses to crouch in the grass so I am discovered and killed, while yet another one thinks we're playing Team Slayer in Halo - after which the chaos erupts. It also doesn't help that it takes a long time to get the matches going, where people jump in and out, and that the default setting is that the PC and console versions are mixed, which leads to enormous advantages for PC-players.

There is also a matchmaking feature that I honestly do not even know what it does, as I could be matched already from level one against those who had made it to over level 60. In addition to the fact that these players already know the levels inside out, they have also had time to upgrade their characters with several advantages. It is a consequence of the fact that those who bought the more expensive edition of the game got to start three days earlier, thereby gaining a head start that has led to a much more boring first few hours for the rest of us who are slaughtered by clearly more powerful opponents.

In short, you really need to find people you can talk to in order to play for real. If you get a reasonable opposition, there can sometimes be good matches when you sneak around each other. For the first time, I understand why NPC guards cannot see you in stealth games when you walk around in tall grass or sit behind walls. Here I feel like there are enemies everywhere and I really don't see them. If I find someone, these can be tagged so that my fellow players can see where the rascal is, and when a treasure is conquered and transported back to the getaway boat, it can sometimes be exciting to protect the person in charge of the chest even though the melee combat lacks finesse.

Unfortunately, however, I have had fewer than five such games. In the vast majority of cases, it feels frustrating. The game has questionable checkpoints, annoying computer-controlled opponents, random events that can undo even the best of plans and every time I play I mostly just want to shut it down, rather than play another game. The idea is that the levels and everything that can happen should give the feeling that no match is the same, but unfortunately it almost immediately feels like I've seen it all after just a paltry hour of playing, and in the end this is barely even mediocre.

It's not enough that Hood: Outlaws & Legends actually has several interesting stages I'd love to see more of in a better game (or in a multiplayer game in this vein where I don't have to compete against others) and actually runs really nicely at 60 frames per second. Unfortunately, this is a waste of potential that could have been so much better. 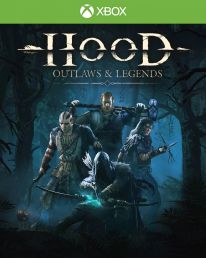