Runic Games isn't a studio that spits out games left, right, and centre, but they have already proven they know what it takes to make one. Both Torchlight and its sequel were excellent, and although market logic dictates the smart thing to do would be to make Torchlight III, the studio chose a different path. For a few years now Runic Games have been working on a completely original game, Hob, and it's in a different genre than the one they're best known for.

While Torchlight falls in the action-RPG category, Hob is mostly a platformer with some light puzzles, combat, and RPG elements. It's also a game all about exploration that refuses to hold the player's hand. In Hob there's not a single spoken or written word; the only text you're going to see is in the menus, and even then it's kept to a minimum. The game starts when a robot decides to rescue the protagonist, a nameless creature with no clear motivation, and you then have to work out the story yourself as you watch it unfold while exploring. It's all very minimalist and open to player interpretation, and by the way, here's a small tip: you can watch the comic-style prelude to the game on the official website.

The same is true for the gameplay experience, as Hob teaches you the basics but little more. There are no arrows to follow, and no extensive tutorials, and instead there's a map showing where your next goal is, and where you can find collectibles (but without showing you how to get to them). You'll have to solve puzzles, navigate platforming sections, and above all explore. Having said all this, we never felt stranded or lost in Hob, or at least not to the extent that we couldn't solve the problem with some exploration or experimentation.

Hob's world is beautiful and original, but also mysterious. Scattered around the map is a strange 'corruption' of unknown origin, and in general terms, the goal is to remove this corruption and restore the world to its natural beauty. The player's actions really affect the world around them, not only by removing corruption but also because this world is a gigantic puzzle with moving parts. By activating a lever you may be completely transforming the scenery around you, while everything fits perfectly together like an elaborate Lego set.

It's brilliant design, which demonstrates the tremendous ability of Runic Games when it comes to world building. The way everything fits, interconnects, and reacts to the player's actions is truly impressive. That's why exploring Hob is such a delight, as you uncover its many secrets and hidden paths. The delightful art that accompanies the game also helps, with well-defined and vibrant colours. The environment is enhanced by the ambience, with excellent sound effects and a discreet soundtrack that serves the experience of discovery and adventure that the game aims to convey.

Hob is mainly a platformer, played in the third-person and with fixed camera angles, and the controls are simple and work quite well. Whenever we missed a jump, we felt it was our fault, not due to latency in the controls or poor design. You'll also have to solve a number of physical puzzles where it's not so much about thinking deeply, but mostly about looking for ways to overcome an obstacle. The other element of gameplay is combat, during which you can perform quick and strong attacks, block with a shield, teleport a few meters, and roll.

The combat works well enough to offer some variation, but it's not the game's strongest element. There are also some light RPG traits in the sense that you can evolve the character through points you'll collect during the adventure. There are no attributes, but you can use these points to buy new skills, like the shield we mentioned above. As you explore the world you'll also find new "recipes" for actions and abilities that you can unlock, as well as items that increase the player's health and energy to perform special actions. This makes the character progression tied to the exploration part of the game, and not to the actual fighting.

Hob is overall a fluid and polished game, but there are times when this is not quite true. We found situations, especially when the game shows a lot of scenery, where the game's frame-rate dropped noticeably. We also encountered a few bugs, including a situation that caused the game to crash. Another problem is the fixed camera as although for the vast majority of the game it works fine, there were a few moments where the character became obstructed by the scenery.

These are minor problems that didn't really affect our game experience, and overall we loved exploring Hob's world during its ten-hour adventure, (it can be longer if you want to fully complete it), the keyboard being precisely that: exploration. This is a game for those who enjoy losing themselves in original worlds, with fluid and fun gameplay, and for a modest price of £15, Hob is an easy recommendation for anyone who likes to go on interesting adventures.

Gamereactor UK
+
Beautiful art, Inspired world design, Balanced mix of platforming, puzzles, and action, Fluid gameplay and animations, Fair price.
-
The fixed camera can get in the way, Some players might feel lost both in terms of story and gameplay, Some frame-rate drops.
is our network score. What's yours? The network score is the average of every country's score

"We loved exploring Hob's world during our ten-hour adventure."

Shortly after shipping its third title, the studio has shut its doors.

The Torchlight developers' next game is set to launch in late September.

We caught up with Runic Games' COO Allen Fong at Gamescom.

From the makers of Torchlight. 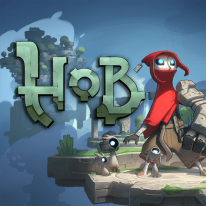